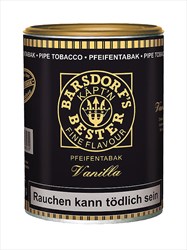 The taste of this blend - based on dark cavendish tobaccos - is rounded out by the fine vanilla aroma.

Tobbaco of intensive aroma both when opening the pouch and when smoked. Typical Black Cavendish smell while smoking with, chemical but pleasant, vanilla. Suprisingly flat when smoked, taste seems to dissapear.

This is, hands down, the worst tobacco I've ever smoked. Having made acquaintance with a few pretty good "drugstore" tobaccos in the US, I thought I'd give this German "gas station" tobacco a chance. What a fatal mistake!

Taste: hard to judge, due to extreme tongue bite, definitely not vanilla, more like creosote

I would not recommend this tobacco to anyone, ever!

As a new smoker, I was hoping to try something a little more dank and tastier than the Prince Albert's Soft Vanilla. When I opened this pouch of Kapt'n Bester Vanilla, I found it to be extremely dry regardless of it's tight seal. I was smoking outside on my patio so I have little to say of the room note. lighting went well, but as I sat to test it, I was immediately disappointed with the strength - It was almost unbearable at first. I lengthened the time between puffs to let it cool a bit, but still quite harsh minutes later. Unlike the PA's Soft Vanilla, this tasted much more like vanilla extract straight from the bottle and rather detestable. I removed the tobacco from the original pouch and into a zip-lock bag which I've placed on the bottom shelf of my refrigerator in hopes to add a little moisture to it, but I'm not looking forward to giving Kapt'n Bester Vanilla a second try.

Still on an adventure trip, buying blends I have never tried before, I purchased a pouch of this weed.

Opening the pouch, a strong, vanilla-ish aroma with fruity notes greeted me. The tobacco is a fine ribbon cut, close to the wider cigarette cuts in size. The blend contains some bright VA, something I think I can identify as Burley, and dark Cavendish (I'd say Burley-based), in about equal amounts. The moisture level was normal

Lighting up is no hassle, but the moment the pipe is lit, the tragedy begins. The taste is in no way vanilla; the tobacco produces lots of condensation, and after about half a pipe and several re-lights I put this blend away to brush my tongue in the hope of getting rid of the nasty, tarry taste that had developed. The room aroma was still acceptable though.

Another try in a different pipe, more lightly packed, brought the same results, and after a third and last attempt at extracting pleasure from this blend, I chalked one up to experience and filed the pouch in the wastebasket.

Later on, a little research showed that this seems to be yet another attempt by Von Eicken to kill the pipe smokers' tastebuds. And I had thought they had mended their ways by getting rid of all their old horrible blends and sticking to the much more acceptable ones currently marketed under their own name. Silly me.

Well, someone had to try this. For the price I shouldn't complain, but I'd prefer the Prince Albert Soft Vanilla and that's cheaper still! Not much vanilla flavor (they do say 'mild') and the tobacco was not the best and bitter. My pouch was quite dry.