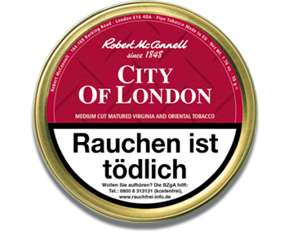 I'm trying to not compare the Piccadilly Circus to its prototype but review it as a standalone tobacco. Cold smell is amazingly spicy Latakia-a-like with typical English depth. The nice cut ribbons of VA,L,O looked a bit too moist but I didn't dry it. Packs great and burns wonderful cold and doesn't need much care to unravel a lot of creamy smoke. The first third of the bowl is pure Latakia of fine quality with nice roasting flavors asides a spicy body taste. As the smoke continues there's a diversity of sweet Virginia and orient flavors beautifully supporting the harsh smoky Latakia (still less harsh than Syrian Lata and not too strong in taste at all). None of the tastes get lost on the way so one can still taste all the components within the last tokes I'd consider this one a classical English Mixture of very good quality with a pretty high amount of Cyprian Latakia (over 30% I guess) no added aromas but very nice tobacco flavors. Closes the gap between sweet and spicy in a natural way. Clear recommendation for fans of English blends and Latakia.

Edit 7/18/2019: After having several tins of this I must add that it unfolds more aromas when dried out for 3-4h. I also took a closer look at the tobacco leafs and there's shares of pressed Latakia and Orients.

I bought this to evaluate as a possible replacement to the discontinued Dunhill London Mixture (before it was announced that Peterson would continue with the original Dunhill recipe). They are similar in many regards, the differences being primarily the subtle variation in the casing solution used. With the McConnell one can tell immediately in the tin note that an addition of coriander and anisette has been used (one of the most popular formulas for processing Virginias) while the Dunhill is obviously sweeter in smell and probably uses some brown sugar in the solution.

I conducted a direct A-B comparison between the two, though, as always, one has to consider differences in aging. My Dunhill had four years of age before I cracked the tin plus another year in a mason jar, while the McConnell is a recent production taken fresh from the tin over the course of a couple weeks of comparison. I found in the McConnell a lack of sweetness and creaminess on the palate which made for a slightly austere presentation, while the Dunhill was smoother and more harmonious.

In terms of flavors, they differ because of the (apparently) different casing: with the McConnell in a meer I consistently taste toasted rye bread and dehydrated celery flakes, with a peppery coriander spice that comes to dominate toward the end of the bowl. In a briar I again get rye but now occasional hits of Cameroun cigar wrap and a quite tannic finish that reminds me of over-steeped Earl grey tea. In either case, not entirely positive tastes for me. The Dunhill has no negative tastes (even when it was fresh), with flavors of toasted pine nuts, pan-scorched salted butter, and - near the threshold of perception - some caramelized brown sugar. The Dunhill also has some of that elusive original 1970's Balkan Sobranie aroma and taste while the McConnell does not.

Verdict: I prefer the Dunhill, not just for the extra smoothness from aging, but also for the innate differences in flavors from the casing.