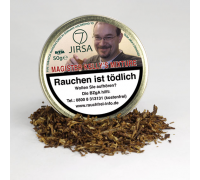 Especially for this blend, a completely new aroma based on fragrant bergamot is developed, which blends perfectly with the tobacco. Refined with a little vanilla, this results in a delicious smoking pleasure, in which the tobacco taste is retained.

Notes: This mixture was also created in agreement with Olda Jirsa, named after the end of the 16th century. in Prague active English spiritualist and alchemist Edward Kelly.

If you aren't or are new to this game then stay well away from this beauty.

It's everything aromatic detractors despise. The smell hits you the instant you pop that old tin. It's like having a lemon squeezed up your nostrils. At this point, anybody who failed to heed my warning should turn back now.

The tobacco strands are rich golden and deceptively alluring. It's moist, too and leaves the smell of lemons/limes on your fingers. It's reminds me of one of those bronchial sweets you can buy when you've got a bad cold. But then I suppose that's what bergamot is known for.

But ooeee is it strong or what. Light this lot up and pow! a gob full of lemony citrus power. Jeez, never known anything as strong as strong as this, and I have a cold as well! It borders on the soapy I must say like a lemon scented fairy liquid (that's washing-up liquid to the Americans).

It's barely smokable. There's little or no limit to this flavour longevity. It just stays on top all the way through (lots of relights) and just drowns the tobacco, which, I suspect, could be anything at all in this citrus brew, you just wouldn't know. But it's made by the Germans so I'll give them the benefit of the doubt.

Ending ? Dottle ? Ash ? Didn't get that far. Couldn't finish the bowl. Equally - and somewhat strangely - there was no room note at all. Nothing. No comment of any kind.

So, really this is a very classy German blend, that someone has been really heavy handed on and, as a result, it barely registers much above the lowest of the low Meine Mixture.

Once again, avoid like the plague if you don'r care for aromatics, but try if a) you're lucky enough to be in Hamburg or b) you've got a cold.

Anybody want their dishes done ?

Similar Blends: I think i've made my point..

I really like tobacco which is flavored with bergamot, but I never had a tobacco with vanilla flavor which I liked. So, I wasn't sure what I should think about this mixture, but I am sure that all Dan Tobaccos are high quality. That's why I tried it anyway.

The tin note is citrus, bergamot and vanilla. The vanilla smell is not that strong which is promising. But the overall flavoring is too strong that there aren't any other tobacco notes.

The downside of this tobacco is, that the bitter citrus flavor doesn't fit to the sweet vanilla for my taste. In my opinion, this tobacco would be a superb one, if they cut out the vanilla flavoring. If they would do so it would be the same as HU Tobaccos Green Gold. Even the quality of the leaves seems to be at the same high level. To sum it up, if you have tried and liked Green Gold and you could imagine that some sweet vanilla would fit, you should try it. If not, you probably won’t like it.