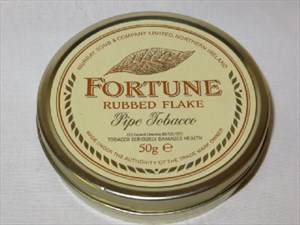 The blend is rough rubbed to give a broken appearance. It is lightly flavoured with an Irish cream top flavour.

If this was originally made by Murrays, then this is the right review- I have an old tin of Murrays "Fortune", a slightly rubbed out, sweetly scented Virginia tobacco.

Anyway, to the review. It smells good in the tin- a sweet, warm, toffee/brandy aroma, quite subtle, but pleasant. The sort of aroma one would expect of a Cavendish aromatic, but much more subtle. This and the fairly rich VA base lead me to consider this as a scented tobacco in the British tradition, rather than an aromatic.

It lights up with great ease, one match will suffice, despite the chunky cut. It burns slow and cool, providing a mild flavour that does not really develop, but remains the same. It does not get boring, but is a smoke to have on while doing something else, rather than an absorbing experience in itself. A good smoke for doing the washing up, then sitting down to have a read afterwards, if you know what I mean.

The flavour is sweetish, or lightly stoved, sweet virginias, with a little extra sweetness from the topping. It does not bite, even when provoked. It has a sweetish, pleasant aroma, but it is fairly strong and tobaccoey, compared to other aromatics. My wife tells me it smells of chocolate, and she enjoys it.

Good stuff, does the job, but not anything to rave about.

Gallaher's Fortune was one of the most fun smokes that I ever had. The tin went fast. Simply delicious and deeply fermented Red Virginia leaf coupled with a mysterious "Irish Misting" that made the tobacco taste sweet in a natural fermented sort of way. The tobacco had some of that Irish kick, too. I knew I had tied into a good one when match first hit the leaf. Swarms of thick, rich Irish smoke encircled me as I puffed in absolute bliss.

If this were not long gone, I'd be smoking it everyday!