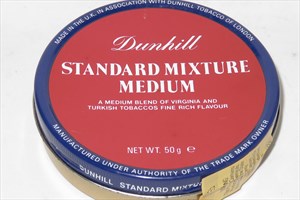 Dunhill Standard Mixture Medium is made using Cyprus latakia and Mediterranean Orientals gently balanced with Eastern US flue cured tobaccos, which give this tobacco an aromatic and rich mellow smoke.

I bought this a year ago, having no idea Dunhill would 'disappear' from the tobacco world. It's a fine smoke, shame it's gone!

My blend has a slightly lighter appearance than the one pictured here. I see mostly light and medium browns with just a few black ribbons. The smell from the tin's quite a calm English one; although the Latakia can be identified, there's a notable hay/fresh touch from the Virginias. The seal 'hissed' when I popped it, so the tobacco's been preserved exactly as it was when tinned, but the moisture's perfect.

At the risk of sounding ciceronian and rhetoric, this would make a great All Day Smoke. There's Latakia, yes, but the smoke isn't a heavy, smoky, mess. The Latakia takes the lead, yes, but is exceedingly well supported by the other two. I note a subtle sharpness from the Orientals, and a pleasing wisp of hay from the Virginia. It burns very well, my bowls have needed little maintenance. The smoke's medium temperature, and hasn't got a bite in it.

Standard Mixture Medium? I find this exemplifies why it's a shame Dunhill has gone. Four stars:

Purchased From: My Smoking Shop UK

So what have we here? A tin of mostly brown leaf, fair bit of a bright, barely any black. Tin aroma is very mild: toast, loam, leaf mould, yeast, forest floor. There is the barest hint of Latakia smokiness. It is the usual Dunhill ribbon cut, and quite dry in the tin.

It lights and burns very easily and quite fast. Flavour is very mild: toast, a hint of citrus zest, black tea with the restrained character of a weak cup of lapsang souchong telling of the pinch of Latakia. This is about as mild an English mixture as one ever smoked, and has less of the oriental component than Early Morning Pipe. Instead, toasty flavours from the Virginias run the show (the Standard Mixtures were all toasted as part of the processing, which no doubt accentuates this). Still, the presence of some oriental gives it a bit more complexity than Baby's Bottom. It is slightly sweet, burns to a clean ash with no dottle, and may be unsatisfying unless smoked in a large pipe.

For me, I prefer more Orientals, so Early Morning Pipe is my preference, but this can be a very nice English mixture to start the day off, or on hot summer days when anything heavy might be a bit much. There are still a few tins of this available, so if you like a very mild mixture of this sort, do get some. Latakia fiends may be disappointed.

Tin note: Floral, nutty orientals with a bit of leather and tangy notes.

Aspect: Perfect moisture even after all this time. The ribbons are the Dunhill cut, with mostly brown, dark yellow and a bit of black leaves.

Taste and Flavor: Mild? Yes, but very tasty nonetheless. It’s a tobacco that you need to have patience with, it’s delicate and can deliver great taste. Being tasty and mild, you might tend to puff more, but be careful, it has a good amount of virginia and you can get the pipe hot, even if it doesn’t bite your tongue. I wouldn’t say it’s medium, if I was to compare it with Standard Mixture, and that is why I say it’s mild. A good share of creamy, sweet and bit smoky latakia with leathery and a bit spicy orientals, with a sweet and hay virginia and a bit of hazelnut, probably from the orientals as well.

Burn: Burns very well, doesn’t go out, but be careful not to puff too fast. Burns equally and leaves a good uniform white ash.

Room note: Latakia incense smell all the way. Not very imposing, but shows that this tobacco has character.

Final thoughts: You really need to pay attention to this tobacco in order to find the flavors, the taste, the notes. It’s mild, milder than Early Morning Pipe. If you puff it as an all day smoke, without paying attention, you will waste a good blend. This should be enjoyed, in my opinion, in calm and silent moments, when you can relax and meditate and enjoy a good smoke. A good blend for the experienced pipe smoker.

I was lucky enough to find a stock of this online. From Carey's. It smells like creosote to me. It looks and smokes so very harmoniously. Ready immediately from the tin. It burns ideally. This was not thrown together . Not huge nicotine but leaves you happily knowing youve had a smoke.it would be difficult to find a better tobacco anywhere.

When opening a vintage English or English/Oriental blend your usually greeted with a tart, wine-like, tannin like and sometimes musty (depending on age and blend) bouquet. Ah... Wonderfully! Upon lighting DSMM the first taste that lands is wood. Did you ever lick a piece of wood? All joking, try it. As I draw I get a distinct tannin affect but not sour at first. More sweet/sour. Possibly due to age. For me the orientals/Turkish are more forward and Latakia follows. Middle of the bowl the reverse happens. Latakia forward orientals/Turkish follow. Virginia's are diplomatic through out. However the sweetness subsides and the tannin/acidic affect marches on. More than a mild acidic affect similar to a stronger Oakey Nose. I don't know if age helped or hindered this blend? The tannin affect lasts the whole bowl which for me tends to dominate. I like tannins and acids very much but not as the main entree. I need a little Xtra v olive oil (preferably Sicilian) with my wine vinegar . Was going with 3 stars relegated to2. 5 because of this. Oh well, such is the exciting world of pipes & tobaccos.