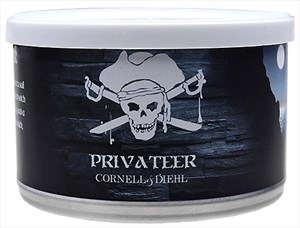 A fleet of bright Virginias set sail with C&D's Privateer, stocked with black cavendish, dark burley, and a small cache of Latakia for a rich, complex journey.

I reviewed Visions of Celephaïs from Cornell & Diehl the other day and found it a debauched mess. This, on the other hand, has restored my faith in C+D!

The ribbons are primarily medium size, but there are one or two bigger pieces of black. The aroma from it's woodsy and smoky, but not as effluvial or harsh as some English blends. It could use more hydration, for me, but without being too pedantic it's ready to go!

Flavoursome. That sums up the smoke! Plenty of flavour but it's a mellower English than some. The same as in the tin-note, the Latakia offers wood and smokiness, but not much of an acrid note. A nice collaboration comes from the Virginias and Burley, making for a fresh, meadow-like, yet tousled and toasty flavour. The black Cavendish isn't as evident as the other leaves, it gives the expected smoothness, but there isn't any sticky traits from it; the piquancy from the VaBur and Lat' side definitely rules. One of the only low points, IMO, is simply the burn. Relights? LOL, that's a moot point, it goes too quickly!

Nicotine: medium. Room-note: quite full but I like it.

Privateer? The only thing stopping this scoring four stars is the speed it burns at. But, the flavour ensures it gets three:

This has been a hard one to figure for me. Privateer is a nice mild-medium English, so not bad, but I'm not wowed by it either. I've had 6 bowls so far, and while some of them were good, some I didn't enjoy as much . Ironically the bowls I enjoyed more were the ones I smoked from a corn cob rather than my normal English briar. As the other reviewer noted, this smokes very fast (maybe the fastest blend I've ever smoked). I got no bite from this blend, but it did heat up the pipe more than other English blends.

Overall, I'll give Privateer a somewhat recommended. It's a good enough mild English, but there are better options out there. Recommend for pipers new to English blends, or for those who just want a fast, easy smoke.

UPDATE: I'm bumping up my rating for Privateer as it's found a place in my rotation: smoking in a corn cob while mowing my lawn on the riding mower. I still think there are much better English blends out there, but the flavor is pretty good, and it's very easy to light and keep lit while doing yard work. I had it about a 2.5 rating before and rounded down to 2, but now decided to round it up to 3.

Age When Smoked: Tin was 2 years old when opened

Nope. Many of the blends that I have liked are either unavailable or difficult to find in the last few years. I suppose that Big Brother regulations and Covid have contributed. Searching for a mild to medium English blend, I found Privateer. It missed my target.

Something, and I do not know what it was, was missing. The tin note was acceptable if not inviting. The listed components were correct, and did not include Perique, which I avoid at all cost. Privateer should have been in my happy spot. It just was not. Not much happening here.

I am a slow smoker. I am always surprised to hear other pipers happily report a 45-minute smoke. My bowls typically burn for over an hour, and an hour and a half is not uncommon. Not Privateer, though. I do not recall a bowl lasting an hour, and I had to put the pipes down to allow them to cool even at that.

Neither the flavor nor the room note were objectionable. Both were just “there,” unavoidable because tobacco was burning. Beyond the Latakia, which I found pleasant, even nice, the rest was without character.

Age When Smoked: Fresh to < 1 month