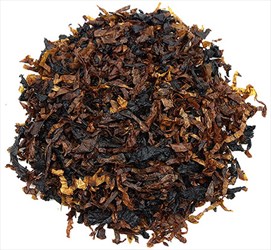 Notes: From Smoking Pipes website: Shane says Sutliff Spiced Rum has the aroma of a strong rum cake; Adam differed, stating it was more of a rum raisin ice cream note. Either way, true to its name this aromatic black cavendish, burley, and Virginia blend doesn't skimp on the spiced rum.

The moisture of this was exactly how I like it to be upon arrival: slightly moist. I like that because I know it will hold it's own in the cellar. Now, I mixed things up today, rather than a morning smoke of a good English or VaPer, I opted for Peter Stokkebye's Black Currant Cavendish: big mistake! I had to have this to remove the aftertaste!

The smoke's a little different to the usual rum aromatics, there's more flavour than I expected. As well as the rum, I get lots of dark fruit/raisins, and a vanilla flavour. It tastes like exceedingly rich Christmas cake. The tobaccos form quite a heavy character, which works well with the toppings. I don't get any sharp/fresh notes from the Va, but more of a ripeness, with the nutty Burley and vanilla Cavendish completing the Christmas cake character. The burn's good, the temperature's cool, and it leaves a pale ash.

Sutliff should have marketed this as a Christmas special. Highly recommended:

So I set out to find a tobacco that would have a very pleasant room note for my better half. I tried a sample of Sutliff's Spiced Rum and found it to have a very nice room note with no bite. Then I started thinking that I did not want my pipe to just be an air freshener but also provide me with some smoking satisfaction. Beyond this, the tobacco was terribly wet and sticky. There was no discernible nicotine. Apart from that, it did have some spice and can be considered an all day smoke.

Received a sample and was able to smoke 2 bowls. Came fairly moist but I had zero issues getting it lit after 30 minutes of drying. Surprised me with minimal relights. Does crackle, spark and pop a bit with flame. Birned clean to the bottom each time. Rum is the only flavor I am picking up but it is consistent throughout the smoke. Puts out quite a bit of smoke. If you are looking for a good rum aro I would highly suggest this. Not my cup of tea but I can see where others will love it.

I'm on my second extra large bowl of this delicious stuff tonight. It is so gentle I find myself inhaling the smoke for want of a deeper experience of its boozie sweetness.

Purchased From: pipes and tobacco

Similar Blends: low country rum but much milder, without any bite.

In one of my recent orders I was sent a sample of Sutliff Spiced Rum. After letting it dry on my desk for about 6 hours I packed it into a cob. The scent was nice and my whole office smelled like a good winter party from letting it sit out. Even after 6 hours to dry it still sizzled a little while getting it lit but settled down nicely. Smoke was nice and thick. Not much in the flavor department but not unpleasant or harsh and what flavor was there was acceptable. The rum scent/taste did carry nicely and there was no bite (probably thanks to the dry time). Smoked down to the bottom easily and the aftertaste was pleasant. Nicotine was very mild. Not something I would normally include in my rotation but the sample was a nice festive-smelling experience. If you are looking for a rum-based aromatic I don't think this will let you down.

If anyone has had Pipeworks and Wilke's Rumcake, then you will immediately recognize the aroma eminating from the bag. Now of course Carol uses much better leaf so let's not compare that but the flavor of the topping and room note are extremely similar according to my house mates. The usual black Cav, Burley and Virginia ala Captain Black White with a spiced cake confectionery topping applied. Also as usual one must either let it dry overnight or place a couple ounces worth on a baker sheet in the oven for ten minutes to eliminate the PG. One of Sutliffs best Aromatics thus far!!! I agree with StevieB that it's perfect for holidays when the feds take away the Christmas / Holiday blends in 2018. Santa will enjoy this on Christmas Eve as much as the family on Christmas morning or each night of Chanukah! Really sets the mood :-)

This tobacco is one of the best aromatics out there. The bag note is intoxicating and smells of premium rum. This continues on with the smoke as you enjoy it. It arrives fresh and a bit moist and may require a few re-lights as a result. You can also give it some time to air dry if you want to. This Sutliff blend burns at a reasonable rate, leaving a light grey ash. I detected negligible amounts of nicotine, and a great room note. A good all day smoke.