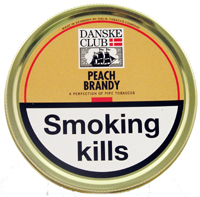 Danske Club Peach Brandy is a finely cut mixture from Virginia, burley and brown Kentucky tobaccos. The traditional procession of this mixture is done in Denmark. It's rounded with a magnificent peach brandy flavouring that will be a pleasure to lovers of Danish mixtures.

Notes: Though it was produced in Denmark, Danske Club is a German brand.

My father used to smoke a mutant form of this Dansk Club version of Peach Brandy which was created by the old Humidor Shops down in Texas. He swore off cigarettes when they got to 50-cents a pack and went to the pipe. He swore off pipes after smoking Peach Brandy tobacco for a week in a cheap corncob. He was hard to understand, but I think he said his tongue was burned off.

This is a very bland tobacco that is not recommended to those who enjoy a fuller flavoured blend.

I would recommend this blend only to the newest of pipe smokers. Very mild, soft and bland, yet highly aromatic. It is a goopy Cavendish that can burn very hot if puffed too hard. It can certainly be a crowd pleaser, but it won't do much for those seeking a good smoke. The taste, indeed, is of peaches, but in an artificial, chemical way.

Back when I was a novice pipe smoker, I tried just about anything that held a promise of being different from the mainstream. During my aromatics years, one pouch of this blend was purchased and smoked by me.

A little bit of explanation before I get down to the grits. Some 20 years ago, Danske Club lost its individual identity and became a split personality somewhere between Orlik Tobaccos and Stanwell. Both by themselves aren't bad at all, but somehow the combination managed to make a mess of a previously quite acceptable brand. One of the first things to happen was that Danske Club Mixture (a pure, bright VA blend which was pure heaven) was discontinued. The rest of the old DC line, over the next few years, was either reformulated or dropped, and lots of new blends were introduced, the quality of which has (at least for my tastes) turned out to be rather questionable. This is one of those.

The pouch aroma of this blend certainly keeps the promise of the print: it definitely is peachy; very fruity and almost sharply so. The leaf may be rather moist, but it is smokeable out of the fresh pouch; the problems start later on.

The room note is rather nice too during the first third of the pipe. Unfortunately, that is when this stuff turns on you. After only a short while, this blend will start producing lots of condensation even if smoked quite slowly; the fruit topping burns off pretty early on leaving a bad aftertaste of what -- for lack of better knowledge -- could be grass plucked from a motorway (it does have that leady, chemical taste, anyway) -- and towards the end of the pipe, you'll learn all you ever wanted to know about the chemistry of tar. Particularly the taste of it.

The label on the tin picture here says, "Smoking kills." After one pouch of this tobacco, I can believe it.