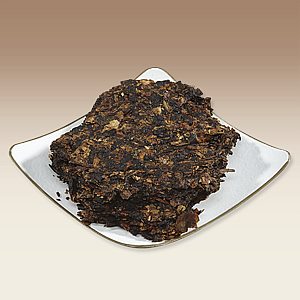 A few years ago, when Russ was still pressing tobaccos himself, he made a new blend based on “Ten to Midnight” (A dark, full Balkan-style tobacco containing bright and matured Carolina and Virginias, Turkish and Orientals, and Latakia), but with some Perique and black cavendish added to it. The Cavendish is steamed green river Burley with no flavor in the steam press.

The Virginias and matured Carolina form the base of the blend, though the role they fill is just above being a background player. They provide some grass, tart citrus, dark fruit with a light tanginess and a “barbecue” fermentation along with a touch of earth and wood. The deeply rich, smoky, woody, earthy, musty sweet Cyprian Latakia takes a light lead over the smoky, woody, earthy, spicy, floral, herbal, buttery and dry sour Turkish and Orientals. The spicy, raisiny, plumy perique competes with the spice from the Turkish, and its last two attributes offer some added nuances. The sugary black cavendish adds a light smoothness. The strength level is almost medium. The taste is medium. The nic-hit is just past the center of mild to medium. Won’t bite, and has no harsh or dull moments. This krumble kake is very easily broken apart to suit your packing preference. Well balanced and more nuanced than its brother blend, Ten to Midnight, it burns cool, clean and a little slow with a rich sweet and savory, mostly consistent flavor. Leaves little moisture in the bowl, and requires some relights. Has a pleasant, lingering rich after taste. Not quite an all day smoke, but close enough than an experienced smoker may consider it to be one.

I was not a fan of this one and prefer 10 to midnight to it. 10TM is more the standard latakia bomb providing more a smooth thick smoke with campfire notes galore. The oriental fades into it and it delivers the taste one would want in a Balkan blend.

This, of course, is a play on 10TM as the description reads with Perique and some unflavored Cavendish thrown in. It seems to me that this would suit me just fine, but it doesn't. Even with the added elements, this one still comes off as mundane and boring. The flavor I am getting is spicy and sour likely a play between the perique and orientals. It still has a good bit of latakia, but with the addition of some elements, others must be subtracted and I would guess this has less of both the latakia and Virginia. It is sharp and edgy.

I don't think this could be a candidate for an all day smoke. I couldn't stand it in larger bowls as the flavor just got to me after a while and I would dump it. It wasn't not too bad in smaller pipes, but would still be far down a long list of others I would prefer.

I ordered 2 oz of this a while back, and just about made my way through it.

The heavy, dense kake is a majority of black and dark brown leaf. A few specs of light VA are evenly placed throughout. This kake is pressed well, and pressed hard. Takes some effort to rub out.

The pouch aroma is deep smoky Latakia, with a slight Perique sourness. I smell a slight sweetness as well. However, according to the description, there isn't any topping.

I don't like to pack it with much force, you'll make it much more difficult to obtain a reasonable draw. Initial lighting takes but 2 matches, this ihas perfect moisture content.

First half of this bowl is slightly sweet and smoky as I expected. A woody, "red oak" firewood aroma is very noticeable. That sweetness compliments the slight saltiness of this kake, which is one thing I really enjoy in an English/Balkan blend. The Virginia seems to be well aged, due to the lack of any sharpness or stinging of the tongue. The Orientals are fragrant and herbal, and the Perique brings the slight mustiness but clean feeling to the smoke. This isn't near as complex as I had imagined it would be, but I'm cool with that! This is a well rounded and enjoyable experience. The room note is pleasant to me, one I truly enjoy. Not sure how much of this is still available, but I'm definitely ordering more for myself!

TastyKake, prepared by way of the culinary magic of Mr. Russ O. An exquisite wafer, smartly blended, stewed, then pressed into just a scrumptious cake high in grain and density; yum. You must admit that it does resembles one of those health-conscious fitness bars from the likes of Quest; call this one Piper’s Indulgence if you must. After all there are proteins and carbs in tobacco so it’s legit.

An aged citrusy bottom provides sweetened support for the mingling of smoky, incensed Latakia and the tart, floral, pungency of the Oriental. Turkish features move a smidgeon to the forefront on this one, making it more Balkan in classification in some camps. The well metered Perique holds some complementing dark musty fruitiness ,while the Green River Cavendish performs exceptionally well in melding the assortment into a creamy smoking taste sensation .

Balkan or English, who can really say? What I can say is that I love Oriental-forward Latakia based blends. This surely is a TastyKake one with an overall profile that is sweet-sour, smoky, spicy and smoothly sharp. Meets my 5-S standards for a quality English/Balkan recipe. An exclusive and limited Ouellette run that truly takes the cake!

I was intrigued by this based on the blend components, that it was a cake, the blender (Russ O.), and also the reviews on P&C and here.

The pouch smell is what you would expect from a blend consisting of the constituent tobaccos. Thick BBQ sauce, smokey, spicy.

This is where my review will go into some guesswork.

I never had the regular Plum Pudding, but I have smoked my share of the Plum Pudding Bourbon Barrel, one of my favorite blends.

Something in the smoke of this reminded me of that, sans the bourbon. Okay... So, since I have a pound of these cakes, I took one and added some strong bourbon to it and placed it in a mason jar with a leftover stave cube from PPBB.

So far the jar smell is identical to PPBB, and that isn't all from the wood cube. The smell from a used of of those isn't THAT strong. So, I can't report on the smoke as that needs to dry and age, but if I am correct, and I think I might be, this stuff is close to PP and if you add bourbon, PPBB and it's WAY cheaper than the SPC blends. I figured I'd throw that out there for the experimental bunch. UPDATE: I smoked some that I flavored with bourbon and man it really adds something to it!

Either way, Tastykake is a great blend and I love it on its own merits. I plan to buy many pounds of it in the future so I never run out.

Those in search of a cheaper alternative to GL Pease Quiet Nights might also want to check this out as it has almost the same types of tobaccos except for the cavendish.

Similar Blends: Could this be similar to Plum Pudding? Quiet Nights, no not exactly but it has its similarities..

I absolutely love this blend. Bought 8 0z. and it came in 3 good size bricks. Easy to prepare, just break some off and gently pack. Lights and burns with no fuss. The flavors are awesome and vary according to how you pack it in your pipe. And any way it is packed it burns slow and flavorful. Takes a while to smoke a big bowl if you are using a large pipe, so its great for when you want a pipe tobacco that lasts like a cigar. English flavors that will have you wanting more! Russ O is the Home Run King of fine pipe tobaccos and this one is a Grand Slam!

This cake is pressed very firmly, it takes some effort to break it apart and is pretty sticky and goopy. A good drying time is nice but not necessary. Make sure to break it enough to burn, but not too much or you'll be eating it.

This is almost like a "Poor man's" plum pudding. Similar ingredients, similar range of flavors, somewhat similar cut, but almost half the price. However this is no replacement and lacks the refinement, balance, and homogenization of flavors that PP has. I also find halfway through the bowl the orientals start to leave a cloying sour taste in my mouth, by the end everything just kind of falls apart.

I agree with TallPuffOBurley when he says this can be a delicious quick smoke, but in a larger bowl I find it always overstays it's welcome. Not for me. Some people might like this though, and for the price it's worth an Oz to try.

I find this a very pleasant occasional smoke, cool smoking and rich almost chewy smoke. No flavoring that I notice. The Latakia is the most noticeable note, but it's somewhat subdued. The Orientals come through rather nicely.

Similar Blends: In the family of Bengal Slices, but quite different. I can't really say what other blends are similar, other than 10 to Midnight.

I've observed this tobacco being compared to Seattle Pipe Club's Plum Pudding Special Reserve (PPSR), and even called "the poor man's" version of it. I've only smoked PPSR once as a friend was able to obtain some, and I have other tobaccos that call to me more loudly, but PPSR is an excellent tobacco. And I must admit, this does call up the spectre of PPSR when smoking it, and both are Balkans, which I enjoy the most, but I certainly wouldn't call this the poor man's version of anything. In fact, gun to my head, I would choose this instead. I find this particular blend better balanced overall with the same smoky latakia notes, sour orientals in the background and naturally sweet cavendish and virginias with the occasional pungently spiced perique flavor peeking through. Breaking the kake up by hand isn't a chore at all from the tranferred mason jar and filling the pipe from the rubbed pieces from the lid is a nice and easy movement. If you pack densely it will force a few relights more than you're used to, but it isn't goopy at all, simply holding more moisture within the particles due to the nature of kake as opposed to a ribbon cut. If you like, rub into smaller pieces or allow to dry a few minutes more. This is one of those offering where you wonder due to price and quality you don't see people speaking of it more often. It's not a latakia bomb as due to the addition of more tobacco varieties, but you can see it's heritage in the brother offering of "Ten to Midnight" which is a well done tobacco, but not as good as this.