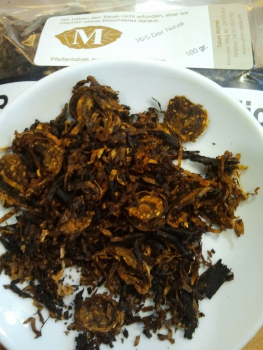 Appetizing Curlys from bright and dark fired Virginias. Earthy, grassy, matured-sweet. In a mixture of delicate nutty burley and some peppery perique. Mildly enhanced by a honey note. Fine, noble, digestible - great at any time of the day.

Notes: "Der Neue" is German for "The New One". It's named like this, because this is the first blend added to the Motzek range of products, when Tom Darasz took over Motzek from Herbert Motzek.

This tobacco is very similar, if not identical to HU Tobacco's Director's Cut but why this should be so is still unclear to me. I have asked the blender Tom Darasz about it but received no reply. A lovely appearance of small VaPer curlies, small flakes and some loose cut tobacco. Now the small flakes are either nearly black or light brown but some are black and brown but still joined together...there is. as far as I know, just one other tobacco like that and it is Orlik's Strong Dark Kentucky so maybe that is used in this blend, it has I believe the liquorice flavour of that flake .

Now, it has been a while since I smoked Director's Cut but if this tobacco was dressed up in that tin, I would not have noticed an immediate difference. Could be that DC has a bit more strength, a bit more spice as well. But at a price of nearly €10 less per 100 gramm, you really can't go wrong with 16/5 Der Neue

This is a re-visit after I haven't smoked this blend for quite a while. I haven't bought this again as I had too much blends I wanted to try in the meanwhile, you may know this "problem" ;-) Yet now I regret not having bought it again...

Lovely cut.. there's Curlys from bright and dark-fired Virginias, ribbon-cut Burley, chunks of black, broken flakes, which contain the Perique I guess. A very mild honey-note was added, which is most certainly most natural, as Motzek only uses natural flavourings!

The aroma from the bag is versatile. Sweet honey notes with underlying spiciness and also some white pepper lurking. Hay and (wal-)nuts. All in all it's very tobacco-y, with only a minor, natural honey note to it. The cut is a pleasure to handle and various packing method are avilable (try smoking only the Curlys f.e!)

In the pipe it performs excellent! Nothing overly complex, but quite some aromas to explore. There's honey-sweet, hay-ish and earthy Virginia aroma, sweet and tart nuts, as well as wood and earth from the Burleys, a slight smokiness from the dark fired leaf, as well as white pepper that tingles your nostrils and tounge - but never bites! A synergetic composition of sweetness and spice. Some bready notes, and tart spice. Sometimes the smokiness get's a mild beefy undertone.

Definetly an All-Day-Smoke! I love a bowl of it in the morning. It gives me the right proportions of sweetness and slightly smoky, peppery spice. Has some strenght, but ain't strong. On the lower half of "medium", I'd say! The added honey flavouring is very mild and really just underscoring the Virginia sweetness. Definetly not an aromatic, not even what I'd consider a "Semi-Aromatic Blend", this is natural tobacco with a hint of honey.

Update: Down-rated to 3-stars (personal rating), as I only smoke this occasionly these days.

Update#2: After having this blend stored for several months in a mason jar the flavor(s)/flavor profile has dramatically changed, if not to say: The flavors are lost! This one solely tastes fructouse-ish sweet... I've noticed the same phenomenon (that quite baffles me..) with several other Motzek/TAK blends. A pity, as I have 200-400g of several TAK-Blends jarred up.. half of which I had to dump in the trash, as they taste totally different.. some of them are fructous-ish sweet, nothing else.. some have lost their flavors and are "flat"... some turned sour... sorry, but I'll have to downrate and recommend: If you smoke this within a short period of time (1-4 months) this is just fine and a wonderful Burley Cake that lacks competition in Germany imho.... but sadly this 'flaw', the loss/dramatically change of aroma/flavors foreces me to downrate..

The dark fired Virginia offers a lot of earth, wood, spice, bread, smoky, some tangy dark fruit, sugar, vegetation, floralness, a mild herbal essence along with light barbecue. For the most part, it is the lead component. The bright Virginia provides a big burst of tart and tangy citrus and grass/hay (which are actually more obvious than the dark fruit and earth from the DF Virginia), bread, sugar, some floralness, light sour lemon, vegetation, and a touch of acidity. The very peppery, stewed fruity (raisins, plums, and figs), earthy, woody, mildly sugary perique closely follows the bright Virginia in terms of effect. The aspects of the burley are lots of nuts, earth, wood, light sugar, and a slight touch of molasses. They are a step above the condiment position. The sweet honey very mildly sublimates the tobaccos as it synergistically helps form a very consistent fruity, sugary, spicy, grassy, mildly floral, lightly smoky flavor. The strength and nic-hit are medium. The taste is a couple of slots past that mark. There’s no chance of bite or harshness, though the honey doesn’t quite tame all the rough edges (which is an observation, and not a complaint). Burns cool, clean, and a tad slow with a pleasantly lingering after taste and room note. Leaves little dampness in the bowl, and requires a couple more than an average number of relights. It’s not quite an all day smoke for the veteran, but it’s repeatable for any smoker. I don’t recommend a big bowl due to the spice content. Three and a half stars out of four.

I concur with smoking-rob's review in every way, aside from HU Director's Cut being a tad better presentation (more well-formed curlies), and fewer lumps of blackish broken flake the tobaccos smell and smoke nearly identical. Based on the fact it is half the cost of DC I will give it 4 stars instead of 3 I gave DC.

One key difference that should be noted is that HU Director's Cut is neater in appearance, its curlies hold up in a jar, while 16/5 Der Neue's unraveled over time, to the point the blend now looks like ribbon, at no impact to taste. Another key difference is that 16/5 Der Neue has some chunks of broken flake, blackish in colour, which don't feel, smell, or taste like DFK or Perique (there're a lot of them so if they were either of these tobaccos it'd be a MUCH stronger smoke than it is. In fact they feel, look, and taste like black Cavendish with a mildish liquorice topping.

It is a very pleasant, sweet, mild, yet with plenty of substance and body, all day Virginia with some spice from Kentucky and Perique, neither of which are very obvious to the taste. Question mark will remain for me about whether it has black Cavendish, and whether there is some liquorice topping going on, but overall, it is a very nice all-day sweet smoke.

A very good tobacco. Sweet, with really pleasent floreal and fruity notes. Burley and virginia’s notes works really well in an esamble of sweet, smooth, creamy smoke. The room note feel something like fresh and sparkling. It remind a good summernight moment of lightness, vitality and lightheartedness. Absolutelly one of my favorite tobaccos.