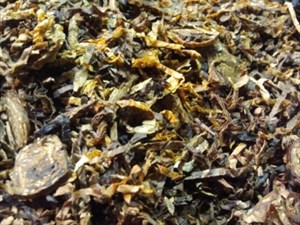 Notes: Translated description from the German website: "Old Louisiana Mix is a mixture that consists of Virginia/Perique curlys, cut Virginia, burley and a small amount of black cavendish. When opening the package you'll may expect a more sweet smell, yet it delivers a more spicy, cedar wood-like aroma with slightly peppery nuances. The appearance offers diversity. Notably are the curly coins, which are copiously included. The black cavendish on the other hand is hardly recognizable.

When filling your pipe, you may want to pay attention that you'll get a good mix of curlys and cut tobaccos, so you can enjoy the whole spectrum of flavours. The curly coins may be rubbed out a bit. Taste wise the tobacco is very spicy, woodsy, and slightly chocolaty. The sweetness is recognizable, and harmonizes wonderful with the other ingredients. It's noticeable that the tobacco is harmonically composed and while smoking the flavour is switching between spicy and sweetish notes. Like this, the tobacco won't get boring. It's a medium strength blend.

Summary: Old Louisiana Mix is an all-rounder and has "all day tobacco" qualities. Easy to handle, enjoyable and diversified and never boring. For the experienced pipe smoke this is a "safe bet", but this tobacco is also worth trying for beginners, who want to try natural tobaccos. A must try, that has great potential of aging! After around 40 years of getting dusty between cigar-boxes this old recipe is finally celebrating it's revelation.

I really wanted to like this tobacco, I am a big fan of small curlies of which there are quite a lot in this otherwise loose cut blend The bag scent was just pure tobacco, smelled like there was Kentucky in it as well but this is not listed as an ingredient. Now, when I filled my pipe with it, all I could taste was....salt....this can't be good I thought so I contacted Tom about it. because I had heard that Motzek uses salt as a anti mould agent. His reply was that he had checked the batch, all was as it should be and that no salt was used anyway in this particular blend. This reassured me and to be honest, the extreme and subjective saltiness disappeared after a few bowls. So maybe it was a body chemical reaction on my part, hard to tell really. But it remains more of a savoury than a sweet blend. I don't think this blend burns particularly well either, I have to give it quite a few relights. 16/9 Der Neue, another Motzek (Tom Darasz) blend fares much better in this department and tastes rather better as well IMO. But give this blend a try if you are into pure tobacco taste, it is not bad at all, just not great. Rob

A lovely blend containing curly pieces of VaPer and cut Virginia, Burley and Cavendish. The perique only contributes to the mellow, round taste and never pushes its way up front as it does in so many other VaPer mixtures. Burley adds to the dark chocolate, cashew nut kind of taste and I can not spot any Cavendish in the smoke - not that it would be missed though. This tobacco is a perfect all day smoke, not boring after a few bowls and not too strong either, in fact it feels rather mild to me. Only near the end of the bowl the mellow character gets a little peppery. Very well done, TaK!

Age When Smoked: fresh from the bag

First thing I noticed when looking at the tobacco is the high percentage of (Va/Per) Curlys. Lovely apperance, together with the cut Virginias, Burleys and the black sparkles of Black Cavendish.

This isn't you average Va/Per blend imo, as I perceive a very different taste-profile. On first light I get a slightly note of malt, which rarely comes up again while making your way through a bowl. Virginias deliver a tad of its typical citrusy-sweetness, along with decent earth. The Perique is of fine quality and comes along with only a hint of fruits (mainly raisins), but a good punch of pepper and a tad of sourness. Burley's rather in the back and flattens any rough edges by contributes slight nutty notes, which is enhancing he earthy dimension quite well. A very buttery note is consistent throughout the smoke, which makes the smoke creamy and the flavours rounded. A very subtle woodsy flavour is also to be noticed in the back and adapts perfetlcy to the taste-profile.

One thing I noticed about the Perique used by Motzek: Motzek´s Perique has a taste unlike any other Perique I got to smoke. I don't know which tobacco leaf they make their Perique of, but it's delicious as hell. Sour-ish, with gentle fruit and a good punch of pepper. Almost Oriental character to a certain degree to my perception, which leads me to belive they may produce it from some Oriental leaf.

Old Louisianas refined, pleasing taste and it's price of 17€ for 100g of this quality and craftsmanship (the Curlys are hand-spun) makes it a safe bet for my daily rotation. A blend that can be smoked all-day, without getting boring after a few bowls, as there is plenty of flavour to explore.

Yet another 4/4 stars Motzek blend to me. Produced according to a 40-year old recipe this diamond finally found it's way in the store front.