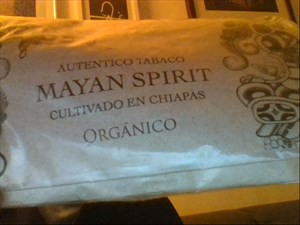 Some friends brought back a pouch of this tobacco from Mexico. They bought it as they thought it were a local RYO, but it isn't actually. Cut is too coarse, you need to smoke this in a pipe.

At first, I had doubts about it being tobacco at all. It smells strongly of dried fruits, but in a different way than Virginia does. So I googled it, and found out it is made of nicotiana rustica, known in some countries as "farmer tobacco". It's supposed to be strong, but this one is not.

At first I smoked it mixed half/half with Virginia, with nice results, but I couldn't really identify it. So I smoked the next bowl pure, and finally realized what it is - a cigar-type of tobacco, light but still enjoyable. It lacks some body, and there is not much aftertaste, perhaps because of the little nicotine it contains. For me it worked best mixed with the Virginia.

If you're a fan of natural tobacco, and/or cigars, and you stumble upon a pouch in Mexico, go for it. Definitely a nice souvenir, and you support organic farming in one of Mexico's poorest regions. Packaging is beautiful.