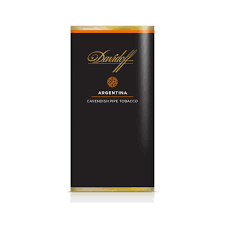 Continuing with the reviews on Davidoff's new products, after trying and commenting on Brazil Virginia, now it's up to Argentina Cavendish. The appearance of the mixture is a thick ribbon ready to rub, the black cavendish predominates over some golden virginias. The humidity is good, but I preferred to let it dry for about half an hour. The smell is not as intense as BV, it smells like a chocolate with flowers, a floral touch that will appear later. It burns well, and when you start smoking ... SURPRISE !!!, a floral flavor appears that IMHO is very similar to the floral taste Lakeland of Grousemoor de S.Gawith. This flavor will always be present, but later the honey flavor is added to the mixture, it goes in and out. Do not bite the tongue, but it is advisable to smoke delicately to appreciate the flavors in their magnitude. The flavors are not noticeable artificial or chemical and the tobacco is of very high quality. Leave a whitish ash and smoke fresh and dry. It is another highly recommended surprise, a MUTATING LAKELAND.

Argentina is one of the best tobaccos one can buy. The actual tobacco is of fine quality. The top flavouring is mysterious and deep. The overall mix is rich and slow burning. It performs as tobaccos should and there is no tongue bite. The Argentina we receive in Europe does not have an overwhelming honey taste.It has a pronounced cassis or slightly liquorice note (environmental factors,storage,etc..?) 40 years of pipe smoking and this one is amongst my top three. The others are Orlick red tin,and Macbaren Scottish mixture. I would add Condor , but there is controvosy as to whether it really is tobacco as such. Suitable for beginners to pipe smoking. Suitable for others in the room. A good smoke from Autumn until about November and then in the spring. It could be too dense for those hot summer days. Best in a large bowl, straight pipe with small mouthpiece allowing for the pipe to be in the mouth for most of the smoke. It also worked well for me in a blowfish. Works well with small regular relaxed puffs..the famous "kiss puff" technique of Larsen. Enjoy!

At first, before smoking the blend, i was on the verge about buying it. It is somewhat expensive for a cheap aromatic blend and the heavily cavendish and virginia combination left me uninstrested. However, i decided to give it a try and as it turns out, this is a fine aromatic blend.

When i first opened the pouch, there came to me a mellow sweet honey smell which i liked. It's moisture was also pretty good, it didn't need any drying nor was it too dry. The cut was more of a rough than a ribbon one.

Hoping it doesn't turn out badly, i packed a bowl and started smoking it. The experience was indeed enjoyable, although not great. The taste was way lighter than i expected, it was pretty sweet and mellow. it had a bit of a moist sweet aftertaste, which made it clear than there was a lot of flavoring on this blend, it wasn't just the tobbacco you were smoking. The taste was becoming all the more subtle until the end of the bowl, although retaining some aromas up to the very end, while the aftertaste remained as well. It burned evenly throughout the bowl and had none, and i mean it, none tongue bite. To summarize, it is a good experience as it didn't have the problems that most cheap aromatics do. Light enough to smoke all day long, it is an aromatic that has very subtle, mellow elements yet none tobbacco taste. Good but nothing special, hence the 3 stars. Would i buy it again? Yes Would i recommend it for new smokers? Absolutely Would i recommend it to non-aromatic smokers? Mehhh

The ribbons are split evenly between black and gold, and the pouch has a very clear smell of honey to it. The moisture of my pouch is perfect, and the mix only includes one or two coarser pieces; mainly it's a blend of medium size ribbons.

The flavour from Argentina Cavendish: there's lots of honey. This, and the weak nicotine would make it a probable good choice for newbies. The topping outweighs the tobacco flavours to a certain extent, making it more of a heavy-weight aromatic, than a slightly flavoured blend. A.C burns well, and it doesn't bite me.

As I said, the nicotine's weak, and the room-note's quite nice.

All in all, Argentina Cavendish only deserves two stars:

One of the common and on the cheap side tobacco that you can find in many places. This one gives a nice honey flavour that lasts enough for the duration of the smoke and emits a nice aroma to the room.

It burns very well and is cheap enough to give it a try and in my opinion is a whole lot better than the similar priced and equally available from Davidoff Brazil blend.

If I had to be more fair with Argentina, I would have to probably rate it with 2.5 stars and for me is the best cheap aromatic smoke after Mac Baren - 7 Seas, the only one from that price range that I've rated with 3 stars.

It's about an aromatic staff. All the sweet thing is there, you can taste it . But I thing that it leaves a bad taste in my mouth after smoking .I think it's a bit medium to strong. It's just a good altrnative

I have had a pouch of this on the go for a while. One of those I will finish it but wouldn’t rush to buy again. There is a strange topping that I’m not sure I love. I can’t quite nail down exactly the what the flavor is – my taste buds aren’t that good at picking out the exact state of play. Its almondy or something - like a liqueur you drank on holiday that was good at the time but tastes not great once you are home. Really not sure I like it. Used to smoke Davidoff Scottish Mixture when I worked in Saudi Arabia – it was on available in the cigar shop I used to frequent in Al-Khobar. Much preferred that offering from Davidoff. I wanted to like this blend but it’s not for me – sorry.

davidoff and peterson aromatic blend are very high quality in my mind. they both have pleasent strenth and flavoing are not too much. maybe just 70-80% flavoring strenth compare to other very cheap aromatic blend. It's important that others in the same room will not think you are firing candy or Vanilla pods or a birthday cake. This argentina blend have high % cavendish tobacco brings high sugur and sweet flavor like maple syrup. although its not complex but its a very gentle blend can be enjoyed by aromatic&non-aromatic tobacco lover.

It is possible to make a Black Cavendish-based blend that behaves itself well and is easy to enjoy. This is not one of them.

That out of the way, the pouch note is as expected, of bread, treacle and vanilla. The leaf is black, with about 10 % bright VA in there. Lighting is no problem, and if you pace yourself well, the burn will be calm.

The flavour is not very sweet—actually, there is not much flavour at all, apart from a note of coffee and treacle. The room note is brilliant, though.

At the end, I have a very hot pipe, a goodly amount of dottle, and the nagging suspicion that this is somehow the world's first de-nic tobacco.

I bought this one on a whim, and I might have been influenced by the marketing efforts that went into the name and the pouch design (blackish and discreetly stylish). You will find it ready and easy to smoke. Moisture and cut seemed right to me from the opening of the pouch. It packs and lights and smokes easily. On opening the pouch, you get a distinctive honeyish smell that is quite mild and agreeable. On my first bowl, I was somewhat disappointed. I found it bland, lacking subtlety and complexity and even, well, flavor. I put that disappointment on the fact that I had previously smoked a rather strong English blend. On my second bowl, I still found that the room note was nothing to be amazed about, and that the mild honey was very mild indeed while the blend had some harshness to it. But I did enjoy the smoke, and I found myself coming back to it more often than not, and now I enjoy it more and more. Let's be honest. This is not a first rate flavoured blend. But there is definitely something interesting and soothing and relaxing to it, if you're willing to take the time necessary to discover it. So much for overrated and slick packaging. But I would have missed something of the pleasure of a smoking inquiry without it.

I like Lakelands and scented tobaccos and I also dip, albeit infrequently, in a Danish blend, but generally I regard full-fledged aromatics with trepidation. I would never have bought these new Davidoff products to start with, but I was kindly given a generous sample of each and I did smoke them.

They all smelled exuberantly, Malawi smelled of butterscotch, Brazil of tropical fruit and Argentina like a sweet Christmas pastry.

They all seemed to need some drying time and I obliged without letting them dry out completely. All took to light easily and burned well, fairly dry and cool, without need of relights. None produced any tongue bite to me and all smoked well to the end without becoming harsh or moistening the pipe excessively. So these blends do not seem to consist of inferior tobaccos heavily cased to mask the dullness or harshness of the tobacco, on the contrary these are extremely well crafted aromatics.

Now as far as flavor is concerned I got what I smelled from all three. With Argentina in particular there is a sweet dark cake quality which I cannot better describe. That in combination with the Cavendish taste are the main elements, but there is some nice sharp Virginia taste to prevent the blend from becoming cloying. I also tried it completely dry (still burned cool and did not become harsh) and it did taste even more of tobacco. I actually preferred it completely dry. Because the taste is subtler here than on the other three new Davidoff products, it’s actually as much an added sweetness rather than flavor, I think I prefer Argentina Cavendish to all three.