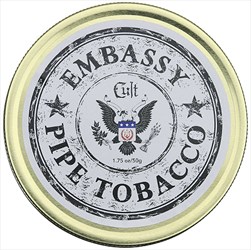 The tin-note clarifies that this is an aromatic English. Although it doesn't smell of just vanilla, it's also sweet. It currently says coarse cut, but it's basically a ribbon cut blend. The mixture's made of black, brown, and a few light yellow pieces, and is nicely hydrated.

I find the vanilla flavour's slightly stronger for the initial part of a bowl, but calms down quite quickly. It then stays as a fairly mild, but consistent flavour throughout. The Latakia gives the leading tobacco flavour, but isn't overly smoky, sharp, or caustic. The back-up flavour's a creamy, hay-like, and sweet-nutty, one. It burn's brilliantly to a pure white ash, without giving so much as a nip to the tongue.

This was a unique smoking experience for me because I had never experienced a blend such as this. My Latakia experience has only been with non-aromatics. I could not note a casing per say but the flavor was sweet from the first light with the smokiness of the Latakia prominent. The sweetness comes from the Virginias and the Cavendish with the Burley adding balance. It smokes without bite and the flavor is consistent throughout the burn. The Latakia stands out, but it is not overpowering. It adds a special extra difference to a good tasting smoke. I have tried to purchase more and so far have been unsuccessful in finding it available. If I had known it was going to be so good I would have bought more initially. Hopefully it will become available once again so I can stock up on more for future enjoyment.(7/13/17) It is available again and I bought several more tins. I really do like this smoke!

This is a really interesting blend. I was intrigued by the possibility of a tasty vanilla aromatic, but this tobacco is much more. The vanilla notes are strongest in the tin, and present really in the first few lights. Midway through the bowl, the Latakia comes through subtly but clearly, almost with a bit of spice. It is not heavy or smokey, but there is a strength to the smoke midway through that is not present in the early, sweeter puffs. The tobacco burns to a fine ash all the way to the bottom, has no bite if you smoke it at moderate pace, and has a nice light gray smoke. I enjoy this smoke when I am looking for a lighter aromatic, but still want a bit of traditional English in the smoke as well. It is not a lot of either, but there is enough of a presence of both that it is worthwhile to try though I probably won't buy another tin for a while.

I now find that I smoke this when I am looking for a light English blend. If you like something that is a bit of both, this will do the trick. If you, like I, prefer strong blends in their style, well, this is not your choice.

The tin note hinted to a slightly stronger coating than is present in the the char with the Latakia standing in the fore without being overbearing. Taking easily to a match, the true light has a bit more of the flavor from the coat and the relight only has a mild ash taste. The subtle burley neatly ties the sweet Virginia and cavendish to the faint vanilla that remains even throughout the bowl. A fine, white ash and a pleasant after taste is all that remains.

Embassy describes itself as “course cut”, but I see no difference here to typical broad cut ribbon. The delicious VaBur tin note balances baked goods and raw sugar with a small dash of Latakia and just a hint of vanilla.

The charring light is delicious: tame, raw sugar and a bit of quality parchment burley. Unlike so many PG-laden offerings, Embassy took that charring light and ran with it. Another puff and I set down my unnecessary second match. After the initial sugar burns quickly off, don’t expect any epiphany-inducing flavor spectrum. Instead, sip slowly and patiently. You’ll be rewarded with a very smooth vanilla topped VaBur that burns cool and quite dry absent the PG-laden sloppy gurgly mess so often proffered by this genre. What I don’t get here, however, is any Latakia. Though present on the nose, it’s blended away, overshadowed by burley that, unfortunately, becomes ashy and monochromatic as the bowl slips past half mast.

This is a decent blend, towering over the goopy vanilla aromatics, but for an “Aromatic English” or “American English” ex: Wilke, it falls far short.

It's not terrible I just don't like the Latakia, as with all latakia's it taste like incense to me...I guess if you're into the "floral / Incense" taste this would be a great blend for you. it burned rather nicely down to a white ash with no issues.

Tin note is a typical English with a dash a vanilla. I enjoy cross over blends and this smells like others I’ve had.

Lights and packs well enough and is not overly wet. I taste the nutty woody burley out front. The Virginia hay flavor is toned down by the sweet cavendish. Both add a nice sweetness with the vanilla topping being mild and is a nice touch. Its lightly sweet and the touch of Latakia adds some depth to the blend. Latakia is a condiment, not overpowering.

No mouth tingle or tongue bite. Hardly an after taste. Pretty mild and easy going. Burned clean, no goopy mess. Typical of Cult. A decent crossover/aromatic Latakia blend. The more I smoke the pipe the better it gets.