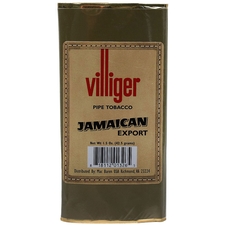 Villiger's Jamaican Export is a fragrant blend of burley and Virginias, topped with hints of cocoa, fruit, and rum for a delicious summertime aromatic.

The Virginias have some grass, tart and tangy citrus, and a touch of tangy dark fruit. The earthy, nutty, woody, molasses sweet burleys play a supporting role. The fruity, buttery sweet rum is very obvious and has a mild spice note, which indicates Jamaican rum is present, too. I also sense an extremely light essence of cocoa here and there. The toppings do sublimate the tobaccos, though all work well together to create a very smooth, consistent flavor from start to finish. The nic-hit is very light. The strength is very mild, and the taste level is mild. No chance of bite, and has no dull or harsh moments. Burns at a moderate pace, cool and clean as it burns to ash with few relights, and leaves little moisture in the bowl. The pleasant after taste and room notes from the rums lingers a short while. An easy going all day smoke.

The unlit blend smells lovely, aromatic, sweet, and slightly sharp. The pouch's seal has prevented it drying out, but neither is it too wet.

To me, the flavour's nice, it's just aromatic enough, without being clumsy. Of the toppings it's the fruit/citrus which eludes me, the rum and chocolate form the smokes leading taste. With these two, the rum's stronger at first, the creamy chocolate joins in once the burn's settled, becoming equal in weight in after a little more time. The tobaccos are slightly subdued in comparison, they take a little effort to identify. It gives a low temperature burn, with a smoke that doesn't even give a nip of bite.

The room-note's pleasant, and the nicotine's mild.

I picked up a few pouches of the different villiger's to try over the summer.

The first one I opened was the Jamaican which I'm guessing is so named due to the rum content. Upon opening the pouch, the note definitely was booze. Not sure if it is rum or not.

The ribbon cut tobacco was moist to the touch after breaking the seal. It was easy to pack, being careful not to make the draw too tight (easy to do). Fairly easy to light (took three tries to really get going)

There was a booze flavoring in the smoke like the tin note, I'll take their word for it that its rum. The flavor is consistent through the bowl as is not overwhelming but more pronounced than other "rum" flavored blends. The base tobaccos could really be anything as I didn't taste them much under the rum.

Produced quite a bit of dobble/moisture during the smoke but not overwhelming for an aro.

I didn't get much nicotine from the smoke at all. Burned down fairly quickly to a nice grey ash and no gunk.

For not having high expectations, I found myself enjoying this and wishing that this was what people got when they bought "Drug-store" tobacco as I'd smoke it in a heartbeat over any of the CB line (and I smoked CB for years when I smoked before)

Room note was noticed by the wife as "quite nice" which means I'll be able to smoke this on roadtrips in the car :)

Good quality, very reasonable price. Get ya some.

Age When Smoked: new from pouch

Let me start by saying that this is a mighty good smoke. The price is also good, but for me that is just icing on the cake, because if it it cheap and taste like crap all is for naught. Quality leaf in this one for sure. Virginia and burly melded together with fruit, cocoa, and rum and done in such a manner that it is not fake tasting makes this a good all day smoker. One of the best aromatics I have smoked. Won't try to over analyze this, just smoke it and enjoy it. May become my go to aromatic. They need to stock this stuff in the local smoke shops and drug stores, blows any thing Captain Black or Borkum has out of the water, in my humble opinion.

On my quest to try as many different brands as possible, I tossed this cheap eat into the shopping cart (having no previous issues with Mac Baren products). Historically, most things in a pouch are cheap and horrible, so at $4 was this a good deal?

The bag opened up with a clearly artificial smell that was certainly fruit paired with cheap booze from the bottom shelf of the Rum aisle. I wasn't buying any notion of chocolate however. It had an air freshener quality to, that was unusual and oddly pleasant (at least unsmoked). The cut was that miserable fluffy thin nonsense that wads up in the bowl and burns best loosely packed.

The brew was mild on nicotine, and the topping that once had an semi-intriguing smell, burnt off into a gross chemical bite. Even the smoke was a peculiar thick white, likely due to whatever tobacco substitute was burning. Suffice to say it was a bad investment.

The target audience is the teenager who defied Mom and Dad by smoking cloves and now wants to find something else to annoy them with at the head shop, so effect over quality here.