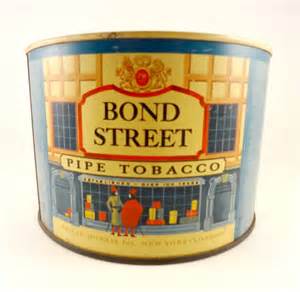 Soapy with a touch of perfume, the tobaccos were mostly covered under by the toppings. The sugary black cavendish was just about the only taste I got (just barely), except for a dull, hay Virginia note or two. The nutty burley and woody Kentucky were just detectable. The nic-hit was mild. Burned a little fast and needs to be sipped to avoid the harsh note, though it avoided tongue bite. Needed an average number of relights, and left a little moisture in the bowl. Was not an all day smoke.

As I continue to weave my way through the recently re-released golden oldies now being produced by House of Windsor, the latest stop on memory lane was Bourbon Street. (Formerly Bond Street)

The smell in the tin and the taste at the match are quite different. Yes, Bond Street does have a tobacco taste, albeit a rather hard to find one to me. I was consumed by all the flavors and bourbon casing.

When you first pop the lid of the plastic tin (unless you bought a pouch )and take a whiff, you will swear you have just unwrapped a bottle of Jim Beam. The chunks are on the dry side and easy to pack. Bourbon Street smokes fairly cool too.

Can anyone point me to an aromatic tabacco that's similar to Bond Street? The aroma reminds me of my childhood and a friend of my father's that would smoke this. now that I am an old fart myself I'm looking to rekindle some of those childhood memories and I'm looking for something similar in aroma to bond street.

Many of these bygone blends are sorely misunderstood by today's smokers. They have flavoring that we aren't used to experiencing in pipe tobacco. I find Bond Street to be a refreshing change of pace. I like the soapy/perfumy essence. The cube cut is also something you don't see in today's drug store blends.

This stuff was quite foul! I have tried the original only, and not the "match", and will say that this stuff is about as rank as it gets. For some reason, it reminds me of Mixture 79. Anyhow, don't waste your money with this, and as far as a "match" goes (that never taste much at all like the originals anyhow) im sure its worse!

I remembered this as a "fall back brand" whenever I couldn't find Edgeworth. That isn't to imply any similarity in aroma or taste. I was impressed by the cube cut and initially thought that it might add a special insight or unusual taste the blend. Recently I found an unopened pack and promptly put it to the test in a small meer. The soapy flavor was still there, and it tended to burn hot but it did serve to remind me of my choice to smoke it when Edgeworth wasn't available. The contrast was remarkable. Alas I can think of no reason to smoke this brand unless,of course, you are anxiously awaiting the arrival of your favorite blend. Poor Bond Street.

A so-so smoke. A bit soapy as others have described, but very minimally present to my taste buds. Not much in the way of tobacco flavor. Only thing is a non-offensive room note - old time pipey smell, but not as old time pipey as some other blends. Too mild for me. All in all, not enough here for me to want to smoke it again. It goes without saying, there are way too many other blends out there that are simply better.

By the way, my pouch was labled Bond Street. Some reviewers seem to feel the newer incarnation is now Bourbon Street. I have never smoked the Bourbon Street variety, but after having read the reviews, it seems they are describing something very different from what I have experienced with Bond Street.

Tried it again just for giggles. The only one giggling was the evil little creep that sold it to me.

While I applaud HOW for reintroducing Revelation as it is now my all time favorite...I must scratch my head in disbelief that any company would waste their time reintroducing this acrid, foul blend. I have no desire to try the new based on my experience with the old! You might as well shave Ivory soap into your bowl and light it...while it may leave your mouth with a fresh and clean feeling like the soap, that would be the only positive...if anyone offers you this to try, turn and run away screaming!

I hope this stuff was better back in the day because in its current incarnation as Bourbon Street it is indeed horrid. I like the soapy flavor in some of the lakeland tobaccos but this is seriously ridiculous. Take cheap tobacco and dump joy dish soap on it and add some Jade East cologne. Whalla!!! Now you have Bourbon Street.

I seen the other reveiws but I just don't get it. It's cool but has a familiar taste that reminds me of mixture 79 . Ill pass on this one. If your'e wondering about my rating on this tobacco see mixture 79.

Now sold as Bourbon Street. A plain mostly Burley cube cut with Va. and light topping. Easy to pack and light, stayed lit well. Gentle easy to take flavor, could be smoked all day without bite.