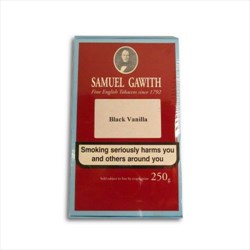 A quality blend with a great vanilla flavour.

I'd describe this as more of a straight Black Cavendish, coarse cut, blend. The pouch smells very sweet, it's a good inclination of what's on its way.

The flavour of the smoke, again, is sweet. The vanilla's strong, but there's also an extra flavour of something sweeter: honey, or maple, maybe? The extra sweetness might come from the Black Cavendish's manufacturing process, but it seems louder than most Black Cav's. Wherever it hails from, it makes for a superb evening/dessert smoke! There isn't a great deal of nicotine in this, I'd actually say it's extremely mild. The smoke that emanates is remarkably cool, and doesn't bite at all.

A nicotine smoker would probably hate this, but I assume an aromatic fan would adore it; it's better than I expected!