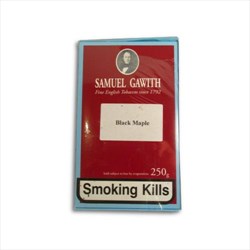 A quality blend enhanced with a sweet maple flavour.

I've amassed a few sample-size pouches of blends over the past few weeks so thought I may as well review a few. The name led me to expect a jet black mixture, but it's not. It appears to be a mix of black and brown Cavendish, with a tiny amount of golden flecks. So, we have a bit of a misnomer there! I was happy to find the water level a lot better than most Sam G's, and the pouch held no surprise in its aroma: sweet.

Firstly, I enjoy the flavour, albeit, it's a fairly sugary/ false one with only a trace of tobacco's! There's hardly any nicotine in Black Maple, it's the consummate beginners strength. There's no tongue bite throughout, and the smoke's very cool. It burns well, right from first light, and the room-note's pleasant.

This is a good aromatic, even though it's very cased it gets four stars from me: