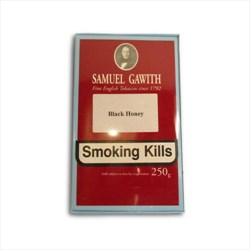 A quality blend with a sweet honey flavour.

The pouch doesn't contain only a straight forward black ribbon, it appears to be more of a mixture that's made up of black and dark brown pieces. The smell is expected: sweet. As it's from a loose pouch it's avoided the usual Sam Gawith problem: it's not had tank loads of moisture sealed inside.

I quite like the flavour of the smoke, even if it's nothing suprising. It's sweet, REALLY sweet, with little tobacco flavour. Yes, there's a detectable Black Cavendish taste, but that doesn't really qualify as a natural tobacco taste, to me, it's too processed. I noticed imminently the quantity of heavy smoke this makes: massive billows! It's suprising that although this has a prodigious added flavour it takes some force to make it bite.

The room-note's nice, albeit the room's plumed with smoke, and there's hardly any nicotine in it.

I enjoy Black Honey, I couldn't smoke it regularly but it's a good aromatic.