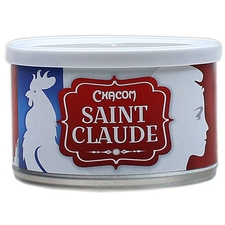 Taking inspiration from the birthplace of the briar pipe, Chacom's Saint Claude is a tribute to the French pipe tradition. Blended from bright and red Virginias, and a sprinkling of black cavendish, it's a minimalist mixture gently sweetened with chocolate and vanilla for a smooth, all-day smoke.

The bloomin' ring pull broke on the tin! But I won't be as harsh as to deduct points for that ;)

Although this is a chocolate, vanilla, aromatic, which includes black Cavendish it isn't a sticky, gooey, affair. The first look at Saint Claude vanquished the idea of it being a cloying aromatic. Black Cav' accounts for far less of the blend than Virginia. Like it says in the description it includes only a SPRINKLING of black Cav'. The moisture in the fresh blend looked exactly as you'd want it.

As was implied by the appearance the smoke's prominently Virginias. The high amount of Vas make it a sweet, fruity, and quite fresh tobacco flavour compared to a lot of chocolate/vanilla aromatics. The Cav' only adds a teensy amount of character. The chocolate gives a rich, slightly bitter flavour and is easily the stronger of the two toppings. Saint Claude burns excellently, and after smoking a few bowls in succession I'd noticed bite had eluded the smoke.

Nicotine: just above medium at a push. Room-note: lovely.

The bright and red Virginias provide citrus, tangy dark fruit, a little earth and grass as the main components. The red Virginia takes a slight lead. The unsweetened black cavendish offers a small amount of brown sugar. The lightly applied chocolate and vanilla toppings sublimate the tobaccos to a moderate extent with the chocolate being a tad more obvious. I also get a few marshmallow and some sourness. The taste level is a little closer to mild than it is to medium. Has a very mild nic-hit. Won’t bite or get harsh. Burns cool and clean at a moderate pace with a lightly sour, judiciously sweet, consistent flavor. Leaves little moisture in the bowl, and needs an average number of relights. Has a pleasant, short lived after taste. An all day smoke. It does lack some depth, so it’s two and a half stars.

This was one of the Chacom line up blends that made an appearance at my local pipe club's tobacco bar recently, and it is one that pleased the crowd greatly. The combination of chocolate and cocoa is done often, of course, and this one fit right in with others that I have smoked. Some have been better and some have been worse. The enhancements make this one a true concoction for aromatic lovers.

Everything I have ever tried from Cornell & Diehl I found nauseating, so I stopped buying their products years ago. Why I thought to give them another chance is beyond me. Redemption? No, the garbage train chugs on.

Siting next to the open tin was actually making me a bit sick, with it's dry cardboard, cheap wine, and gross chocolate (think those $1 boxes of chocolate covered cherries from the drug store) smell. I grabbed a pinch of the thin ribbon cut (a very bouncy cut, filling the whole tin, which was a plus). It was drier than I would of liked, and reinforced an idea of it being old and stale.

The smoke was quite dry and very unpleasant. As an aromatic I did not detect, or my brain refused to accept, any discernible flavor. Here was the Folgers coffee of quality tobacco.

I would describe Saint Claude as stale bread, which as a free man I dislike, but I could imagine some former Bastille prisoner being nostalgic for it.