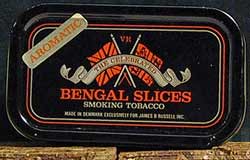 I'm glad that someone referred to this blend as BSA, which I would normally associate with the great English motorcycle company Birmingham Small Arms. Great bikes, with the expected penchant for Triumph-like oil leaks. An old adage maintains that one should always park his British bike in the exact same spot, so there is only one oil stain, rather than many. Apparently, some enterprising chap took this advice one step further and decided to place a tobacco tin under the leaking casing and package the resulting product as Bengal Slices Aromatic. That is the only possible explaination for the atrocious odors that emanate from the tin.

If current thought maintains that the most foul flavoring in all of tobaccodom is 1792's tonquin, then BSA is surely flavored with the Gulf of Tonkin, at low tide no less, replete with residual napalm.

I recently polished, or should I say shoe polished, off a tin I had purchased in 1998. More correctly, I had one bowl and flushed the rest. Anyone who removes a tin of this abomination from the marketplace has provided no less a service to humanity than those intrepid souls who scour the third world removing land mines, and should be considered a frontrunner for the Nobel Peace Prize.

Despite the marketing prose, this blend has absolutely nothing to do with the original celebrated Bengal Slices except the can, which is identical between the two save for a little "aromatic" sticker on the corner.

Upon inspection, BSA appears to be composed primarily of bright virginias. The aroma is basically what you'd expect from a tin of a Virginia/Perique blend (both visually and nasally, initial impressions are that is McConnells Scottish Flake in a Bengal slices Tin).

Unlike most modern aromatics, this one doesn't have a heavily cased feel -- it does have a slightly sticky feel, but that's typical of slices. I'm not sure what the flavoring is -- I haven't yet smoked it with an audience around, but from the flavor contribution I suspect its some form of anise.

It rubs out easily and consistently, although the slices are very thin so if you rub it out too far you can get a very hot smoke indeed.

If the top layer is rubbed out very finely, it lights well and quickly forms a nice ash cap. The taste is about like you'd expect an aromatic virginia/perique blend to taste, sort of escudo with licorice, and it's really a shame that they ruined this tobacco with a casing.

Update: I just discovered that the flavoring is as persistent as Erinmore, after I smoked some Penzance in the pipe and it tasted exactly like Bengal Slices Aromatic. aargh!

I recently purchased a couple of tins of Bengal Slices Aromatic on eBay. The flavor certainly has the old Bengal Slices note, but with a casing that I just could not identify. Sort of wine like in one respect and fermented figs in another. I think it added to the pleasure of the smoke and I wish now that I had purchased more as this one is long gone.

AAAAARGHHHHH... Geee, man, werent I fooled...I bought this tin of junk believing I was getting a tin of the English stuff... I opened the tin and to my total disappointment got a harsh smell of insense to fumigate dead bodies. You get the picture. I thought maybe it will smoke better that it seems, but guess what... Barfing bag needed. Stay away from this insult to pipe smokers.

I believe this tobacco was flavoured with shoe polish. Thats a little harsh,maybe it was flavoured with nuclear waste! This is the most, BY FAR the most horible trobacco I've ever smoked thus far on planet earth. The flavouring lasts in the pipe for years. Stay far away from this dung heap.If I had one word to describe this so called "pipe tobacco" it would be,TOXIC Poop!

It took me several pipes to start to appreciate the taste probably because I'm not a great Perique lover. Even though labeled an aromatic, this one lacks a heavy casing and I still don't know what the flavoring is since it is not that strong. Mostly yellow virginias but some reds and blacks have been pressed together. The slices tended to break up as removed from the tin and I normally don't rub out my flakes. Easy to keep lit, smoked cool and burned evenly to a fine ash. However, the flavoring carried thru even after several pipefulls of other tobaccos and ruined the taste . Give your pipe(s) a good cleaning and a needed rest between brands. I prefer the taste of regular Bengal Slices.

Looks quite like the original Bengal Slices but has a heavy tin nose that reminds me of Sam Gawith's "Sam's Flake" x about 1000. Heavy scent of Tonquin and perhaps stewed figs. The flakes have a greasy feel to them from the sauce. Quite honestly, I'm surprised I smoked any of this because the tin aroma was severely off-putting.

In the bowl, I discovered that while this isn't something I would smoke often, I didn't loathe it as much as other reviewers. The aromatic agent wasn't as overpowering in taste as it was in aroma and it did an acceptable job melding with the latakia and lemon virginia. The flavoring led the show for me, as it often does in heavy aromatics. The nice thing about this blend is that it tasted like regular Bengal Slices with the aromatic agent added. And therein lies the problem. Bengal Slices was already on the sweet side and adding aromatic sauce to it took it over the top. This is like Drambuie to a single malt scotch drinker - toooo sweet. I can certainly understand why this blend wasn't picked up by anyone. It's not horrible but it's not too good either.

This is a rebuild under the guidance of Russ Oulette by the Standard Tobacco Company in Bethlehem,PA, This is not a “match”,but is sold under the original Bengal Slices label.The word “Aromatic” is nowhere to be found on the tin. Components: Latakia / Virginia / Black Cavendish.There is a “subtle top note”mentioned in the description,that adds to a great overall flavor. If you like Latakia mixtures,try this.

Age When Smoked: New,off the shelf

Purchased From: Pipes and cigars.com

Similar Blends: No other.