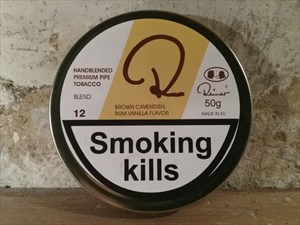 A delicious blend bursting with flavour. Cased in rum and topped with vanilla this is a blend dominated by sweet brown cavendish. A well balanced flavour of high quality tobaccos dancing with the aromatics. An ideal choice for any pipe smoker.

I'll say this for Reiner, when they make an aromatic blend they load up on the sauce! Blend number 12 is explosive with Vanilla, Chocolate and plum pudding elements according to my palate. The Virginia was evident, but way off in the background and used as a sponge to absorb the added juice. I am sure this one is a huge hit for those who enjoy aromatics (which I do), but not for every aromatic fancier (I'm not). Too much for me.

I wasn't too sure what to smoke this morning, so decided a vanilla/rum aromatic such as this should be perfectly non-offensive.

When I removed the lid I straightaway got a nose-full of its delightful scent, it smells lovely! Although it says on the tin it's made up of Brown Cavendish it appears to contain a tiny amount of Black Cavendish as well. There's also a few larger golden leaf like pieces in there; it's quite charismatic looking.

Regarding the smoke, the added flavouring has a lot more life for the first quarter of a bowl, with the vanilla being the heavier taste. The rum gives some sharpness, but it's less conspicuous, and calms down quickly. The tobaccos' taste nice; obviously, the Cavendish outweighs any Virginia in the blend. On the negative side of things it burns hot, and also bites; this shaves off a few stars.

The room-note's quite nice, and the nicotine's mild.

This would do a lot better if it weren't for the malevolence from tongue bite:

Purchased From: The Pipe Shop Edinburgh

I just finished a tin of this that is about 3 years in age. Great tin note and it does come through in the actual smoke quite a bit which is nice.

Still feels moist but lights and burns easily with minimal relights. Nice room note and I have smoked it 2-3 times in a day with pleasant results. I smoke fairly fast and have had zero tongue bite with this blend but I am not sure if the aging helped any with that as I have never smoked it fresh from the tin.

As far as aros go I actually could see buying another tin down the road. A nice departure from my normal lat and burley blends.

It is a gorgeous looking and smelling blend from the tin and very moist and was one I couldn’t wait to try. However it lights fairly easily and immediately provides more of an amaretto flavour rather than the stated rum, particularly at the start. After this calms down the Cavendish and subtle vanilla flavours meld to a crème caramel flavour which lasts all the way through the smoke. I found this smoked much better in small bowl, in a large bowl a bit like smoking incense.

It burned nice and steadily with very few relights but it was a bit damp at the end with some dottle remaining. The biggest drawback is that it burns very hot and produces a hot smoke with some bite but this is probably to some extent to do with my technique as the tobacco.

The room note is certainly not unpleasant but it is strong although much less sweet than I expected.

I like aromatics and I am not averse to the occasional sweet/sticky one (which this certainly is!) but it is one of the better for flavour, just a shame about the heat and the bite.