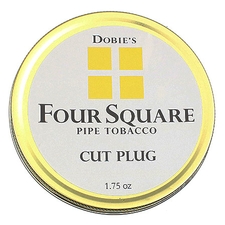 Dobie's 4 Square Cut Plug begins with nothing but sweet, bright Virginias that are rolled, and then pressed square. This is a nicely sweet straight Virginia flake with a mellow room note that can be prepared in a variety of ways to suit your tastes. If you love Virginias without the influence of perique or any other tobaccos, this will quickly become a favorite.

The Virginia cavendish offers a light citrus, a bit of grass/hay, and a small amount of earth and acidity. The toppings are coconut, and a little fruit and caramel. The coconut also provides a mild perfume note. They moderately sublimate the tobaccos. The strength is in the center of mild to medium, while the taste is a couple steps past that level.The nic-hit is a slot short of that center. The flakes easily break apart and burns at a reasonable pace, fairly cool with a light creamy, consistently sweet flavor. Won’t bite or get harsh. Requires an average number of relights, and leaves little dampness in the bowl. The after taste and room notes pleasantly linger. Despite it being a mild to medium blend, it’s not an all day smoke due to the perfume quality of the coconut topping.

Do you like Peter Stockkebye's Luxury Twist . I have enjoyed it for years. If you buy this tobacco , in my opinion , that is exactly what it is . Stockkebye's Twist. Now you can buy a 1.5 pound box of twist for around $60 . That is 24 oz . The Four square comes in 1.75 oz cans at around $10 . To get the same 24 oz. you would need around 14 cans which comes to around $140 . That looks like you would be paying around $80 extra to smoke the Four Square . If this isn't the exact same tobacco it is surly close enough . I cannot tell the difference . Your call .

Excellent packaging with the clear plastic covering the LNF-cut squares. Tin aroma of coconut, which I love. Rubs out easily. I noted that after loading and lighting, this tobacco rises out of the bowl higher than any tobacco I've ever smoked. No big issue - just interesting. I also wonder how the original creators of the Dobie blends would feel about their name on a coconut aromatic. I'm not aware of this one in the original Dobie line-up, so it appears that the Standard Tobacco Co of PA has taken some artistic license with this one. I could be wrong, of course... and often am!

A pretty good batch of tobacco laid waste by a flavoring that doesn't belong in pipe tobacco IMHO... or at least not this prominently. It wasn't a goopy mess by any means, but the flavoring could have been toned down. The way I accomplish that is to dry the tobacco thoroughly to allow the natural tobacco taste to shine and the artificial flavoring to subside a bit. Unfortunately, I couldn't find the sweet spot here. Too dry and the tobacco became bitey and argumentative. Too wet and it tasted "too aromatic" and not tobacco-y enough. So this wasn't for me, and I love coconut. But there are plenty of flavors I enjoy eating that I don't want to smoke. Don't let that stop you from trying this one, however. I couldn't dial it in but you may just love it as it is. It's a pretty well crafted aromatic and if you enjoy the taste, you have yourself a winner. For me, two stars.

Here, the great Dobie's name is attached to a nutty coconut aromatic. When I think of cut plug, I do admit that my mind and palate are at odds while smoking this blend. I do think that it is a fine smoke for what it is and aromatic fans, in particular, will get the best of both worlds here.

Four square tobaccos are Stokkebye Bulk tobaccos which Are canned and relabeled. Don’t waste your money. If you like Stokkebye tobaccos buy in bulk, it is much cheaper.

This is an all yellow bright Virginia that has the usual citrus ,hay and grass and a mild fruitiness . The Coconut topping is obvious and a little something else added probably. Not as sweet as I was expecting but maybe because it was steam pressed . I popped the tin because I wanted something lighter then the Burleys and Red Virginias I have been smoking a lot of lately . It scratched the itch . A decent smoke . Would probably go good with some dark fired leaf and there I go right back to the burleys . Try it if you like bright Virginia with a mild topping .

Sweet hay with an overly sweet topping that my buds find mildly offensive. Not terribly offensive, but I can feel my gag reflex wanting go active. Just gonna have to say that this one is not for me. If you like it, you can have it all.

Pleasant surprise, I had no idea of how the presentation of the blend would be, but removing the lid exposed two stacks of curly flakes; think W.O. Larsen's No. 32. The aroma from the tin carries a slight aromatic trace, but nothing over the top. Moisture's good.

The tobacco gives a fairly eminent flavour, nice and sweet, without much sharpness. The topping may deter a few folks, but I quite like it. Coconut. It's easy to identify and taste, without being too redoubtable and strong: medium is the highest it could be categorised as, at a push. The strength of flavour doesn't really adjust much, it might be deemed as being more aromatic at the very start of a bowl, but after that it's a steady addition.

Bad points are burn and bite: hot/fast burn, with too much bite.

I think my notion of what a plug is, must be incorrect. I was expecting a dense cube of pressed tobacco akin to GL Pease's JackKnife plug, instead I opened the tin to some very thin cut flakes splayed out like a fan of cards in the shape of toast. I guess "cut plug" means they do the cutting, not you. Well, since I'm here.... may as well deal a hand of it.

The initial aroma was pleasing, a Virginia affair with a raisen tinge along with some possible casing, I dunno apricot juice? The aforementioned flakes stuck together, so I chipped bits off, that crumbled quite nicely and packed very well. I also appreciated the small amount of moisture present, which I feel wakes up the product and adds to the smolder. It burned without incident, and produced a mellow smoke you can suck on all day without fatigue. The mild flavoring appealed to my Aromatic sensibility.

I'm not much of a Virginia fan, but found myself enjoying this one. I just wish I hadn't felt tricked by expecting a tobacco cube inside.

This plug has been sliced to resemble a flake and that enables much easier packing than a true plug. Any topping was not overpowering but the smoke was definitely sweet. With an ideal moisture content from the tin, it burned evenly without the need for relights and little condensation.