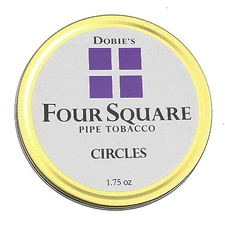 The Virginias have a bit of grass, some citrus, and light dark fruit and earth, along with a mild rough edge. The spicy, raisin, plum and figgy perique plays a strong second lead. The light vanilla sweet black cavendish core provides a little smoothness. The nic-hit is just beyond the mild threshold. It won’t bite. Burns a little slow with a cool flavor, though there is a little inconsistency due to its presentation. Needs a few relights. Can burn to ash with just a little work. Leaves little moisture in the bowl. Has a nice after taste. Not quite an all day smoke, but it’s certainly repeatable.

The new Dobie’s Four Square “Circles” has a nice tin presentation and the tin scent offers up a bit of fruitiness and hay. In the pipe, the Virginia’s offer some high notes with a mixture of citrus and hay. There is more and while a little rough around the edges, the edges aren’t quite as rough as unaged Bull’s Eye. The Cavendish center adds some creaminess to the flake and while is starts off mild, the strength will move to medium, especially if you push it. I can’t help but compare this to the “circle” blends that contain a Cavendish center. I prefer this to Bull’s Eye Flake, but it lacks the smoothness of Davidoff Flake Medallions and has a lesser amount of manually added sweetness that is found in Dan Tobacco’s Roper’s Roundels. I prefer the Virginia's in this to Comoy’s Cask No. 7. To my memory, there is more Perique in the “Circles” than in the other blends mentioned, but to my taste it isn’t overdone. My only real negative to this blend is that there is a bit of acidity in the later stages of the bowl that I find a little off putting. All in all, this is a decent blend that is worth cellaring and it should only improve with age.

If there are existing reviews on a blend I am reviewing, I always read them first. What strikes me about this blend is just how consistent we reviewers all feel about Four Square Circles: good but not quite four star material, smokes like Bullseye Flake, not up to the field leader-Flake Medallions, smokes well but can be a little rough around the edges, will probably age well and is being put away for this purpose and a solid three star blend for now. Had I not read the four existing reviews, the above would have been my review. Like everyone else, I am stashing some tins away for mellowing and ripening - a very solid three stars. Oh, by the way, I agree with reviewer Mr. Big - there is no vanilla aroma in this blend. I took the Cavendish disks out from the centers to sniff and there is no detectable vanilla aroma in them.

I wasn't too sure of how this would appear in the tin, for some reason I expected it to resemble a Mac B Roll Cake or Savinelli's Doblone d'Oro. As it goes it looks identical to Orlik Bull's Eye, neatly concealed underneath some Perspex film. My moisture's great, making fully crumbling the coins easy; I always give blends that have layers of different tobaccos a full rub to ensure an even tasting smoke.

I'm going to be brash by being the first to give this four stars. To me, the Perique leads, with its spicy, dark fruit, flavour. This overshadows the Virginia's grassy/citrus quality; that's overshadows, not masks. The black C' is easily the lightest of the three: a very slight sleekness, but nothing major. The burn from Four Square is flawless, giving a cool smoke, without any bite.

The nicotine's on the lower side of medium, and the room-note's nice.

The first half is very nice. The Virginias offer tangy citrus and hay and the Perique offers dark fruit and ample spice. Can't taste the Black Cav, but I think it carries the added sweetness and provides some smoothing. The second half is a bit disappointing. The fruity notes fade, replaced by a fairly strong earthiness and, as SteelCowboy noted, an unappealing acidity. I'll give it 2 stars on the strength of the first half which is quite tasty.

I bought a tin of this only because I had also scored a tin of the original, and I always compare a "remake" to the original when possible because I believe if you're going to put a time-honored name on a new tobacco, it needs to deliver the same goods. Unfortunately, as I found out later, I smoked the original British version and this one is probably more like the later Danish version, which I have no smoked. This one had black Cavendish in the center, a la Davidoff Flake Medallions or PS Luxury Bullseye Flake. The original British version was simply Virginia and perique. So comparisons are sort of pointless.

As a result, this one is sweeter tasting, and artificially so in the vein of Mac Baren's roll cakes, although this doesn't taste exactly like those. The Virginia is in here was of the citrus and hay variety, and a bit overblown there. The perique leaned towards the fruit side rather than the spice side, as did the original. But it was the Cavendish that hampered this blend. I didn't get any vanilla from it... more just plain sugar, but of an overdone, frosting kind rather than a simple dusting. I always think of pastry when I smoke these kind of blends. I felt I would have preferred this without the Cavendish, and since it was simple to remove it, I did. As a true VaPer, this did somewhat better. If you want the Cavendish center, I'd stick with the Davidoff or, secondly, the PS. This one was just a little bit green in flavor for my tastes.

Dobie's Four Sq. "Circles"- If you're looking for a mild smooth VaPer, this may be for you. The addition of Black Cavendish tames some spice but also dampens the Perique flavor. Early morning or an all day blend, but I would like a little more flavor and kick. I think you can find the same blend in bulk, purchase Peter Stokkebye Luxury Bullseye Flake

PS.- Never tried the original Dobies, but it's listed as "Curlies" not "Circles" and it did not contain Black Cavendish. I also did not pick up any flavoring as some of the reviewers have indicated, especially, "vanilla' , that would have been a total turn off for me

If this one is meant to be compared to the outstanding original Dobie's Curlies, it fell well short of the mark. But, that may not be fair because the original Dobie's Curlies that I have smoked came from very well aged top shelf tobacco from a famous blender who had access to some of the world's finest leaf offered back then. This tobacco is almost artificially sweet with some puffs and really rough around the edges with others. The Perique is noticeable and does not overwhelm. A very average smoke right now, but may really turn out to be really good with some aging..

Wanted to compare this one to PS Bulls Eye Flake and didn't find much difference; smokes cool, without bite or condensation; I prefer the PS especially @ a lower unit price