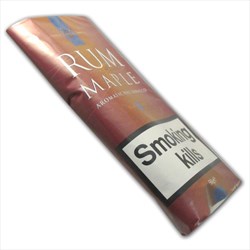 This is a rich and dark tobacco of medium strength. Made up of naturally sweet, sun cured and Virginia tobaccos. Slowly cooked under pressure with maple sugar and rum to form the cake before cutting and rubbing. A delightful and all round pleasant smoke.

The freshly opened pouch didn't reveal what I'd expected: thought it would be a dark, gloopy, ribbon, but instead it's a dark brown, slightly broken flake. The smell from it's just as I thought from the name: a sweet rummy one. There's no problem with the water content, it can be piped without a wait.

The flavour is a lot sweeter than straight rum aromatics. As well as the rum, there's obviously maple, and it's this that differentiates it. If you don't have a sweet tooth- that's a VERY sweet tooth- you probably won't like this. Picture having a glass of rum with about five spoons of sugar stirred in! In fact, by the last quarter, I can't identify any rum, it becomes a straight maple aromatic. I don't get much actual tobacco flavour from it, the casing's too heavy to allow that to happen. Tongue bite doesn't happen, it's actually a comfortable smoke.

The nicotine's medium, and the room-note's okay.

For the first few puffs this seems a good smoke, but after that it just seems a bit boring. It's not that I hate it, I don't, but I couldn't have KR&M in my rotation.

Kendal/Gawith Hoggarth R&M: I tried really hard to like this one. I'm all for supporting local produce. But this just tastes of soapy incense. Really. Not nice. The tin smells neither of rum nor of maple. I know maple. I use it in my offset smoker BBQ, and I know what 6kgs of beef ribs smell like when I use maple. There's no maple in this blend.