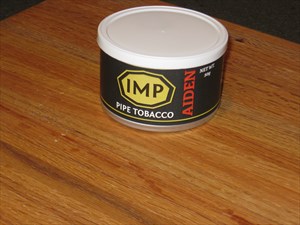 Notes: IMP USA INC. of Burnt Prairie, IL brought four blends into existence in October of 2013; Aiden, Kyzen, Meerschaum Magic and Turkish Pride and all are English blends. In 2015 the company was sold to a competitor who did not purchase the tobaccos and they were offered for general sale to the pipe smoking public at pipe shows.

I purchased tins of all four IMP blends at our 2015 NASPC show. Not knowing where to start, I decided to start alphabetically with Aiden. When I popped the pull seal the aroma of Latakia and Burley and Turkish and with some kind of aroma, alleged to be a caramel flavor, thinly attached. So, as an experienced pipe tobacco smoker, I plodded on and pulled out a wad and spread it out to dry. Thirty minutes later, on inspection, the sample had dried sufficiently and was identifiable as an interesting medium-type English that, just possibly, might have a faint top note. Well, now that we have all that out of the way, how did it smoke? Aiden is an interesting and slightly aromatic English in the top third of the bowl and it grabbed my pipe smoker's attention big time. It is sweet and fragrant with all components playing the game together. At about the end of that wonderful top third, I began to sense things were changing and, in general, becoming stronger. The Virginias became tired and started sitting down and that advanced the Burleys forward with the Latakia and the Turkish still in the game. The sweetness was now gone and it was a stouter version of what had gone before and was still pleasant to me - but, stronger. Toward the end of the middle third of the bowl, things got stouter and stronger yet. Now the Burley and Latakia began to fight over who was top dog with the Turkish reduced to observer status. At this point Aiden had begun to smoke too strong for my tastes and reminded me of two very dark and strong blends I have smoked: Sillem's Commodore Flake and the very last version of the old Smoker's Haven Krumble Kake - dark, oily and monochromatic in its low-register smoke (when I asked what was wrong I was told by the then owner that it was a blending error and had too much Latakia in it!). Now, I'm not saying that any of this is wrong, as some of us like our smoke to be strong; I'm just saying it is what it is and that doesn't deserve the loss of a star in the ratings. Speaking of ratings, I would grade this blend as four stars with the top third being five stars. All in all, a very interesting blend to experience.

Similar Blends: there aren't many aromatic Englishes commercially available and the ones I have tried don't smoke like this one..