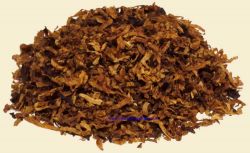 A mixture of light and dark Virginias without any added flavourings.

When I opened the pouch, I felt a touch perplexed: it didn't look medium sized, it looked a lot finer. Maybe that applies to the flavour or colour then, it does look 'medium' brown.

Even though it's called medium, I would say the taste's quite mild. Although it's a Virginia one, it seems to be toned down a jot: it isn't as bright as a Va can often be. It isn't bad, in fact I think it would be a great intro blend to the hobby instead of an aromatic.

The nicotine isn't, as the name would imply, medium: more like mild! The room-note however is a lot closer to the word: medium strength, medium aroma, and a medium amount of smoke!

I rate this as four stars for a newbie, but two stars for me: