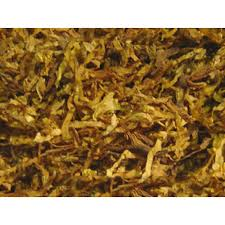 A clean tasting budget blend, that unlike a few, isn't made of mainly tobacco stems! A unique blend of burley, Virginia, and exotic Orientals.

I bought this along with a few other 'budget' tobaccos just to see what sort of quality would be available from a blend that's been made solely for the reason of being cheap.

If I'm honest, I hated this at the start. That was based on the pouch note at first, it smelt floral, perfume like and too false. But then, when I lit a bowl, well that was where confusion set in: it didn't taste too floral (slightly, but not much), and the tobacco's gave good flavour. Don't get me wrong, there's a few issues: firstly and mainly due to the cut, it can burn warm, and too fast. Also it'll give a little nip to the tongue if it's pulled to hard, but other than those it's a decent smoke.

I think this would be a great all-day smoke: medium nicotine, the flavour's not in need of huge deciphering, the room-note's okay, and due to the cost it wouldn't cause much fuss if the bowl had to be aborted when you're called back to work!

Got this from a small 'trafika' in a small town in the Czech Republic just for want of trying something I hadn't tried before and they had locally available. This is Red Bull 'A-type' - with the A standing for Aromatic I guess - and I'm lucky I picked this instead of the V-type which I'm led to believe is pretty much the same, but Vanillaed.

Light aromatic, better than nothing I guess, but only just makes the 2-star mark.

Like the other poster, didn't like it at first. But it's actually a not too bad, burley forward natural tasting tobacco. Not heavily cased or coated in propelyne glycol, with quality looking ribbons of tobacco. It does have a very slight aromatic casing that is kind of fruity and a little floral, but it's very very light, and somewhat unique. You'll mostly taste tobacco here, burley leading the way with Virginia adding sweetness and orientals creating a little complexity and spice.

Works okay as a blender, although that aroma it has will poke through. Works well adding some Cavendish, perique or strong burley to increase strength or complexity.

All in all a nice plain smoke, although a little boring, but nice if you have been overwhelmed with strong flavours of other tobaccos and want to switch it up and save a few dollars. I won't be buying it again as I think there are quite a few better options for a couple dollars more, but as another poster said, it won't make you go "UGH!" And beats other OTCs when you are in a pinch, just for the fact that it's not heavily cased and dry enough to smoke right out of the pouch.

Purchased From: Valmont in Prague

tried this at least 5 years ago, but I remember well. a nice Virginia, burley with a slight touch of oriental but with an aromatic addition, I wouldn't say floral, I would say more fruity. this is long stringy ribbons, so pack tighter than usual and smoke slowly. if you can manage that then it is a decent enough smoke. I will say here while I have the extra disposable income I won't smoke this, but happen I'm on a tight budget this will do.

it isn't a complex smoke, it isn't going to set the world on fire but for what it is, it is a decent smoke and won't make you think "urgh".

room note, smoked amongst smokers it won't raise an eyebrow, although may garner the odd fake cough from non smokers in your company.

All in all if it isn't packed tight enough it will get your tongue and be very unpleasant but pack it tight enough and smoke slowly it will behave itself and give a decent enough smoke.

All in 2 stars, it does the job, if you have the spare coin, you will look for something better if not this will be a good addition.

Purchased From: local shop in town.

Red Bull A-type has nice tin note. I mostly smell the chocolate. When you light it up, it is not so good as I would expect, but it is average aromatic.