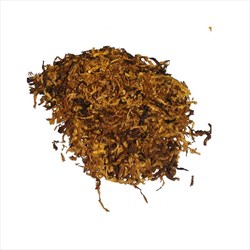 A base of Kendal Gold topped with rich coffee. Coarser cut, and slower burning.

The Virginia has a light citrus aspect along with a fair amount of grass and hay. The coffee topping has a little richness, and a light bitterness, and does tone down the tobacco some. Has a mild nic-hit. Won't bite, but will burn a little warm with a possible harsh note if puffed fast. Burns clean, and a little fast with a consistent flavor. Leaves little moisture in the bowl, and needs just less than an average number of relights. Has an okay, slightly bitter sweet after taste. An all day smoke.

This one's a simple coffee aromatic. Starting with the unlit blend, there's not lots to say: it's a fine shag that smells mildly aromatic. Like the others in the Kendal Gold series, it's a golden brown (hence the name!), and it's of a good moisture amount.

I quite enjoy the flavour of the smoke, albeit it's nothing extraordinary, I find it pretty much like most coffee aro's out there actually: quite rich and ever so slightly bitter. I don't get much from the Virginia where the flavour's concerned, I find the added flavour's a little too heavy to allow the gentle nuances of the Virginia to shine through.

The nicotine's of the expected amount for a Kendal Gold blend: mild to medium, and the room-note's very pleasant.

This blend's okay, but in a market where coffee aro's are everywhere it had to be really special to gain applause: somewhat recommended.