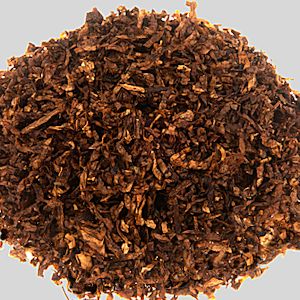 Sutliff's version of Rum and Maple. The ideal mixture of Virginia and burley is combined with warm, sweet maple and the subtle tones of rum. A great smoke for any time of the day or night.

The maple is a tad more obvious than the rum, and the toppings do tone down the tobaccos a lot. There's no artificialness or syrup to the toppings. You do get a little grass and tart and tangy citrus from the Virginia. The nutty, earthy, woody burley takes a little of the lead over the Virginia. The strength is mild, while the taste is around the center of mild to medium. Has little nicotine. Won't bite, but does have light rough edge from the burley. Burns clean and fairly cool at a moderate pace with a very consistent flavor. Leaves little moisture in the bowl, and requires an average number of relights. Has a very pleasant, lightly lingering after taste and room note, and is an all day smoke.

The pouch smells heavier with maple, the rum is borderline unnoticeable. The ribbons are quite delicate, and mine arrived too damp.

The smoke: just like in the un-lit note, the maple is far stronger than the rum, this, is right down the scale. Of the two tobaccos' I get far more from the Burley compaired to the Virginia. As a bowl burns the maple gets louder, but sadly the same can't be said for the rum; it's very mild for the whole journey. The smoke's cool, bite free and it's actually pretty thick. Rum and Maple burns well, if anything it goes a bit too quickly.

The nicotine's mild and the room-note's good.

This is a great quality aromatic:

Yummy Goodness!!! That's all I can say. The maple is the main flavor here and even though I never had a rum flavored tobacco that I liked , the rum comes off second to the maple and is in no way overpowering. A simple smoke that makes me want to find St. Alphonso's Pancake Breakfast and stay awhile. Highly recommended!

Received this from the in-laws with a few other assorted tobaccos, primarily aromatics which by chance are the tobaccos I rarely ever smoke. The gesture was appreciated, 4 oz of 3 different aromatics will probably last me the rest of my life lol.

Loaded this into a cob and have had about 4-5 bowls of this thus far. You get some rum you get some maple, more rum, the flavors don’t dampen the flavor of the tobacco but my preference is for tobacco taste vs flavoring.

Long ribbons, easy to pack and relatively dry, stayed cool throughout the smoke.

Not something I would ever buy, cool to try, will have this on occasion and or gift to my aromatic smoking pipe club members.

Tin note was a nice natural rum and maple but is not as strong as some other Maple offerings. Perfect humidity in that it the tobacco is supple but not sticky. Burns well from the second light from the torch. Burley is dominant from beginning to end leaving a good chesnut flavor with some nice maple through the nose on exhale. Very nice full tobacco flavor. The Virginia in this seems to be a background support player. Inevitably, a comparison to Maple street will be asked. I just polished off my last tin of Maple street purchased 9 years ago. Maple street from about 2010-2011 was strongly Virginia forward with Burley support while this one is opposite. Rum & Maple is just as good, and the Burley forward is actually what I wanted tonight. An all day smoke, but particularly enjoyable with a dram of cognac after dinner.

Good tobacco. No bite to it and smokes really cool. There's a good (and light) flavoring to it, and I can attest that it tastes somewhat like maple, since I'm from the land of the maple syrup (Quebec,Canada). The taste is not overhelming,by my opinion, so it would make a great everyday tobacco for the aromatic's lover.

Age When Smoked: About a week

Having had Vermont maple syrup on the french toast this morning, I can certify that this blend is exactly right when it comes to that wondrful flavor. My supply was bulk, cellared for 12 months, with the moisture exactly right, normal relights, and maintained a consistent flavor with a very pleasant room note. Highly recommended.

A milder, less intricate version of "maple-walnut" in my opinion, which is in itself mild. Sack note is amazing, but doesn't really translate to taste or note. This is a good pleasing smoke, but the maple may not be strong enough for some if you reeeeeally wanted a shot of syrup. This is just a light 1 layer taste of maple. I'm ok with that. Just a hint of maple is actually what I wanted, I just didn't know it yet. I want to smoke a pipe, not a drippy Eggo. Oh speaking of dripping, this needs to be dried dang near crisp to enjoy. The long ribbons are a nightmare for a small bowl briar when they are all greasy. I only get a hint of rum if I push this to crackling by back breathing, let it rest and resume smoking. I've been to told the room note is pleasing. Don't misunderstand the review, it's a good smoke. I often add some Super Value Choc too it, or a pinch of their English.

I did not realize that this blend is NOT an aromatic. It has no bite, or noticeable nicotine. After I left the bag open for several days, I had no problem keeping it alight. Has a woodsy flavor, not like maple syrup. Pouch note is sweet. Room note is like a campfire. It should please bystanders.

UPDATE TO REVIEW AT BOTTOM OF PAGE

I never had the original Rum & Maple so this review is on the merits of the Sutliff Rum & Maple itself.

Receiving this for Father's day I opened the package and was met by a Light Maple and Light Rum aroma with a touch of an earthy and woody background. The tobacco seemed to be slightly moist so I put it on a paper towel for an hour.

The tobacco is a very long ribbon cut and it burned very evenly, medium pace, lit easily and had a wonderful thick smoke that gave a very, very pleasant room note that reminded those who smelled it of pancakes with maple syrup on them. This burned down to a dark ash, had very infrequent re-lights. I do feel this one could cause a tongue tingle if pushed and found it gave a pleasant taste when sipped slowly. I would suggest using a shallow wide bowl for the long, long ribbons would pack better in a bowl like that.

Upon lighting I tasted light rum and a very light taste of Maple. The rum seemed to slightly overshadow the Maple the whole smoke. The two main stars, Rum and Maple were supported by the pleasant and very light flavors of grass, a slightly tart and slightly tangy citrus, lightly earthy and a touch of wood with an appearance of roasted chestnuts dancing in and out of the picture. The flavors seemed to play well. Throughout the whole smoke Rum seemed to lead and it seemed to grow in dominance a bit toward the end of the bowl. The aftertaste was of a slightly sweet rum with a touch of maple throughout the whole smoke and after it was done the maple flavor in the very long aftertaste was a pleasant addition to the rum aftertaste. For many this could be a all day smoke. For me the Rum makes it a once a day smoke.

As always a Sutliff product has come through in making a pleasurable smoke. I like this tobacco. I have to admit that RUM is not my choice in alcohol flavors but this is pleasant. I like this a lot and will probably smoke it on special occasions and will try it in different pipes to see how the flavors react in them. This could make it into my regular rotation. Would buy again. My only wish is it would've had more maple flavoring. The room note is one of the best I ever have smelled. 3.3 out of 4 stars

UPDATE- After three months of being Jarred I smoked this in my Weber Shellbrooke Prince and what a change. The Maple flavor has deepened and this was like eating a maple syrup covered pancake with the maple really coming forward with the rum receding a bit and the smoke being more mellow and more sweet. A Delicious and a wonderful smoke with a wonderful light aftertaste. Upped to a 3.8 star rating.