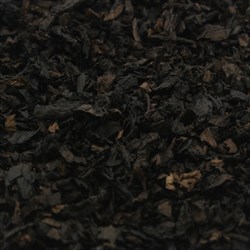 Black Kathy is an unusual black Cavendish made by steaming both Burley and Virginia, which are combined and allowed to meld before adding a creamy combination of vanilla flavorings

A fairly coarse mixture, exceptionally dark, with quite a pungent aroma. It has just the right amount of moisture to it, and although it's loosely pouched mine was rolled quite tightly so if it was too damp there wouldn't be much room for any air to circulate and dry it.

The taste of Black Kathy is your simple Vanilla aromatic one: plenty of vanilla, and a basic tobacco taste. In all fairness to me the black Cavendish gets somewhat confused with the added vanilla; I can't be too sure if it's 100% added flavour, or partly the black Cav giving some vanilla to the mix, as well! The smoke from Kathy feels cool, and it burns splendidly.

It generates highly palpable smoke, creating 'plumes' of it in the room; so even though I like the room-note, it could create pandemonium! And the nicotine's very mild from it.

The Virginia is mildly grassy with a slight sweetness. The black cavendish is not really noticeable; same goes for like the Virginia. Both are mostly sublimated by the vanilla topping, which is a little thin in depth. Has no nic-hit. Won't bite. Burns well and a bit warm if puffed fast with a consistent flavor. Requires few relights. Leaves no moisture in the bowl. Has a pleasant after taste. An all day, routine smoke.

This is a nicely done soft aro. Smells delicious upon opening the bag with the vanilla squarely prominent. This was a pleasant smoke that delivered a soft nuance throughout. Savored it slower than most smokes and it didn't disappoint in flavor from beginning to end. It's soft, smooth, a little sweet and not an over-the-top vanilla. You won't pull much of anything else with varying tobacco nuance through but it serves its purpose nicely for its place in the genre. You could smoke this one all day long. Also a good intro tobacco as well. Two and a half stars.