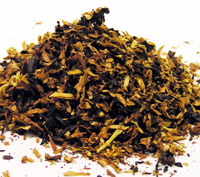 A mixture with plum sherry, black bourbon, rum, and cherry.

It seems to me that this is just one of the many heavily cased aromatics out there. By no means is it a bad blend, it just lacks anything to make it stand out.

The pouch note perfectly indicates that a strongly flavoured, sweet smoke, is about to proceed. That's the first pointer towards this being one of many.

The Virginia easily outweighs the Black Cavendish; it's about a 75-25% split. It's a little too wet so it needs airing first.

The flavouring has been heavily added, but surprisingly it doesn't bite too bad because of it.

Nicotine? A standard aro' strength: mild. I'd maybe go as far as suggesting it's very mild!

The burn behaves well for the whole pipe long. Providing it's maintained with a tamp or two it causes me no issue.

The room-note is yet another aromatic quality: fairly heavy, fairly sweet, and fairly aromatic.

As I mentioned, this is like many of the common aromatics out there. That's not necessarily a bad thing though, like I've often been told "things only become common because they're good".