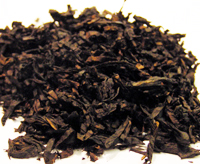 Double fermented cavendish tobaccos for a mild smoke enhanced with the flavour of English black cherries.

It's a good enough blend, but not very surprising:

The mixture's practically wet with the casing, it has to have a dry before it can be piped. The smell suggests it's going to be a very false smoke, which it is. On the plus side though, even if the topping could be considered very strong, it tastes quite nice: flavoursome, not sharp. The tobacco flavour's simply Black Cavendish, there's zero Virginia. To be fair, even though the topping's heavily added, the Black Cavendish doesn't get cancelled out too much by it: I get quite a clear vanilla-like Black Cav' flavour coming through. The temperature of the smoke's as cold as ice, and there's not any chance of a bite.

Nicotine? Ha, Ha, there's none of it! And the aroma of the note isn't the problem, it's the amount of smoke it creates in the room that is!

This is alright, but it doesn't belong in my rotation: