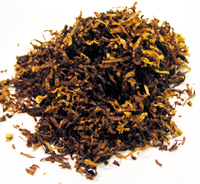 A medium mixture with a fruity flavour.

The pouch contains a mixture that's very appealing to the eye: there's all sorts of cuts and shapes in there, right from tiny ribbons, all the way up to a huge piece that looks as though it's the wrapper from a rope. There's a very slight citrus aroma from the pouch but nothing that would suggest a 'topping'. The colour implies the absence of Black Cavendish, and maybe the inclusion of Brown Cavendish. The moisture's good, typically for a loosely packaged blend, so imminent smoking can proceed.

At first, the only fruit taste I get from the smoke is a citrus one, it takes around five minutes for some darker fruits to enter the scene. Once they have the smoke seems very flavoursome; that's flavoursome, but not 'strongly flavoured'. It pairs perfectly with a cool ginger beer (IMO).

The smoke seems, to me, to contain a high proportion of Burley; it's not sweet enough to say it's got a heap load of Cav' in it, or grassy enough to imply loads of Va; I like it.

The nicotine's medium; this would make it a good addition as a 'anytime of day' smoke, for me.

I wasn't sure how this would be; to me, the name WHARF dale implies canals or something; Wharf definition: a structure on the shore of a harbour, or on the bank of a river. So that's quite vague! But I enjoy the blend, whatever it means, I think it's worth three stars.