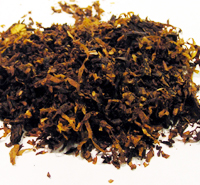 Could be anything in this mixture! Usually mild to medium and aromatic.

Being British, the name Special Brew instantly conjures up an image of strong, cheap, rank, lager: it's the name of a common 'rocket fuel' styled beer over here! If I were in charge of this company I'd change the name, this is rather good and doesn't deserve that image!

I'm guessing it's made up of the left over 'sweepings' from when they weigh-out blends, so I'm assuming every batch varies. That would mean that your pouch will differ?

The mixture looks eclectic, there's almost every colour, size, and shape in there! It smells aromatic, but I can't quite put my finger on what it is: maybe some alcohol, some nuts, but no definitely fruit. The moisture's good, as is the flavour: from this I would definitely say alcohol makes up a large proportion of the aromatic addition. Some nuts and vanilla also seem to be present as well. The tobacco taste? There's pretty much every sort! But for this batch, it's definitely led by Black Cavendish. Nicotine? This pipe's very mild, but, as the blend varies from batch to batch, yours might blow your head off with N!!!

A new paragraph for the low point: tongue bite. This issues a good one, but I guess yours could be different!

This bowl deserves three stars, but as it's a random mixture I can't say if this applies to other pouch's or not.

Age When Smoked: One Month