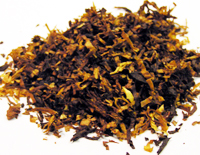 A slow burning blend of cavendish and Virginia tobaccos. Mild to medium with a great aroma.

Think of the ultimate beginners blend, thought of it? Well I'm smoking it LOL! That's not meant to sound like a bad thing, it's not, but this would be best suited to anyone who wants a mild/aromatic blend, as opposed to a full/raw English or VaPer.

The blend's made up of quite a high proportion of Brown Cavendish with only about 15% of the blend being black. It's been sat in my cellar for around 2 and 1/2 months, so the loose packaging has made the contents dry enough to be smoked directly from the bag.

I'm not to sure why they state the flavouring as being Other/Misc, to my palate it seems to be a simple topping of vanilla: fairly mild, but definitely vanilla. The tobacco's don't seem too complex either: like the pouch appeared, it's mostly a Brown Cavendish taste.

The nicotine's very mild, and the room-note's alright: nothing special, but nothing offensive.

Although this would be loved by many smokers, I can only somewhat recommend it: it's nice enough, but not my sort of thing.