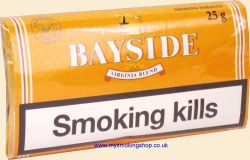 When I ordered this I had very little expectations, it was listed under Shag Tobacco so had a very good chance of being a hand rolling tobacco. As it transpires, I think it'd be more suited to the pipe rather than rolling; it's a medium size ribbon.

It's a bit tricky to get a good burn going, but after a decent go with the flame a steady one begins. Once it's burning the flavour's a lighter Virginia one; it doesn't have any of the depth or dark fruit's of a well matured one, but all of the sharp citrus, grass, and hay with a little bit of sweetness in the background of a younger one. To be negative: it can bite if it's not smoked tentatively. Another reason to take things easy is the speed: if it's puffed too harshly it can burn quick.

The nicotine's pretty mild, and the room-notes fairly pleasant: a good amount of Va qualities with only a little actual smoke.

This is an alright blend, albeit I wouldn't pipe it regularly. I think it would be fair to give Bayside two stars.

I recently bought a 100g tub of this due to a dip in my finances, at £18 it provided quite a healthy saving. After all, I thought, how bad could it be? Well, let's see.

The tin aroma is one of sweet hay, there is something slightly artificial about it and also astringent, suggesting quite young tobacco. It begins to answer the question of how it's so cheap, none of that aging for a year nonsense that seems to work for those quality tobaccos. It packs easy but is a little damp and can take a few lights to get going, but that's about as much fuss this tobacco makes. The smoke itself carries over from the aroma, I think there is a light casing or topping but it, like the flavour as a whole, is very mild. There is, of course, more than a whiff of suspicion that this is a RYO tobacco dressed up as pipe weed. I would go with that inspite of the ribbon cut, it does have that quality to it and, as a rollie smoker too, it makes an easily passable cigarette as it does a pipeful.

To be honest, I didn't expect a great deal from this, the main attractions being it's utility as both pipe and rolling baccy. Actually, it fills both those roles modestly well, even if it can bite a little when pushed. That, though, is were the problem is, it's a little too modest, it doesn't thrill and to be honest, I would rather cut out my rollies full stop (no bad thing, I'm smoking too much of them as it is) and spend the same amount on a bit less quantity and a lot better quality pipe tobacco. Nonetheless, this is a dirt cheap tobacco that sits just on the right side of bland and possesses a certain fluidity in it's use. As a back up tobacco for the terminally short of cash, this fits the bill.

I think I must concur with StevieB and Wibblefish, there's not a lot to say about this tobacco, it has so little taste and flavour there is no chance of this "ghosting" your pipe. It's the sort of tobacco you buy if 1) you are short of cash. 2) There is no other pipe tobacco available. It still beats Clan though IMHO