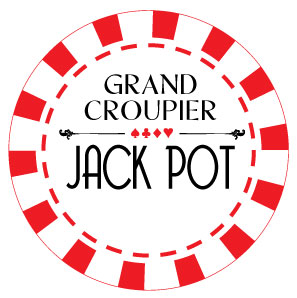 Like aromatics? Feel some just don't have enough variety of flavor? Well in Grand Croupier's Jack Pot, we've got an aromatic with all the flavors. The secret is combining all the random sorts of excess batches from an artisanal blender: an all-sorts, if you will, albeit an all-sorts composed entirely of quality components. Price is low, quantity is plentiful, and if our past blind review of Grand Croupier's everything-of-all-sorts offering is any indication, you can expect a good smoke for the mere pittance of a minimum bet.

A fabulous value allsorts blend composed mostly of lightly topped burleys and Cavendish, Jackpot is a sweet treat. I am confused about this and its cousin, Double Down. I bought 4 ounces of each of the three allsorts blends: Jackpot (supposedly aromatic...it's really not), Double Down (a Virginia - burley allsorts) and Boneyard (an English/Balkan allsorts blend).

Upon arrival, I immediately opened each bag for a whiff. I am blind so won't comment on colors...but the cut is a real mixed bag for all three blends. I found ribbons, cubes, bits of flake, twigs (not many) and even a carburetor from a 1972 Chevy Vega... (O.K., didn't really find any auto parts in the bag).

The confusion arises from a real similarity in pouch aroma between Double Down and Jackpot. I smelled raisins, a hint of cinnamon (!), nuts and a bit of earth and hay in both. Neither blend is appreciably sweeter than the other. For a few minutes, until I had smoked a bowl of each I actually believed that smokingpipes.com had either made a mistake or had pulled a fast one on me.

Mechanically, these are just about perfect, although the mix of cuts makes packing and lighting a little bit tricky. However, once properly packed and loosely finger-tamped, both blends take fire very easily; I was able to ignite both blends in corncob pipes with only one match. In the case of the Double Down, I didn't need to relight once; the Jackpot seems to have more moisture in the pouch and require a couple relights before burning down to a fine dry ash.

Nicotine: The Jackpot surprised me, as I was expecting low nicotine (I was under the mistaken impression that the Jackpot is an aero... I don't think it is. Whatever topping has been used in the component blends has been lightly applied. The nicotine in Jackpot is a stout medium. The Double Down yields only slightly less nicotine. The Boneyard compares in nic level to Dunhill's Nightcap.

At around a buck an ounce (plus shipping), all three of these are a steal. The tobaccos are of high quality. Careful smoking cadence with both Jackpot and Double Down virtually eliminates any chance of tongue bite; I'm a bit of a Hoover when I smoke, and I didn't get bitten once. Mouth feel for both Double Down and Jackpot is great. There's nothing shisha-like or vaporous for any of the three blends, all of which yield a great mouth feel and clouds of smoke. Aroma according to my wife for both JP and DD is lovely...and she dislikes most of the tobaccos I smoke, even the sweet aeros.

It would be easy to compare both Jackpot and Double Down to O.T.C. blends; Jackpot reminded me of Carter Hall in room note, behavior in the pipe, sweetness and nicotine. Keep in mind that Carter Hall in my local shops costs nearly $4.57 per ounce...while Jackpot is around $1.08/ounce. As the tobacco is of a superior quality to my beloved CH, the "luxury pouch" may have seen its last with me. No reason to buy overpriced O.T.C. blends when this is available and has much less propylene glycol humectant added than do O.T.C. blends.

Batches will vary; the next purchase may contain a slightly different mix of constituent tobaccos. However, the quality is nothing about which I would complain, especially at the price. 3 stars; it doesn't merit 4, as neither blend (Jackpot nor Double Down) is particularly remarkable and are a bit generic. It does satisfy, and at the price is a bargain. Will I bbuy again? A hearty "yes" for all three current allsorts blends.

Age When Smoked: Fresh and moist right out of the ziplock bag.

Because the constituents of this are sweepings I'm guessing each batch must vary? Here's how I found mine:

The blend includes quite a lot of chunky broken flakes, there isn't much of a smell from it, and the moisture's smack on. Black Cavendish accounts for the smallest amount, the majority's medium brown. The smoke from Jack Pot: nice enough but I wouldn't call it Aromatic. The Burley gives a strong flavour, with the Cavendish sweetening the flavour. Most of the Virginia seems to be Virginia Cavendish as I get only a little natural grass/citrus. The burn from J.P. is a good one, giving a bite-free smoke.

The room-note's quite pleasant and the nicotine's medium.

It's OK, but after one bowl it's boring.

This is just one of those blends where a review is not normally too helpful in that there can be no consistency in what you are smoking as it is just odds and ends. I ordered an ounce of this out of curiosity after ordering four ounces of the double down.

The strange thing is that my experiences were just like reviewer Bleepy's, so I guess it can be said that this blend just may be consistently terrible. But as Bleepy pointed out, not in any way that you would expect. Bleepy puts this up to the different toppings canceling each other out that is the cause of the bland flavor profile this blend has. This could be, but I think it more likely that this is just a case of toppings flashing off. I would bet that it takes quite a while to accumulate enough of this to gain a marketable quantity. And the tobacco is likely open and exposed that whole time.

There is no point in going into the taste of this. It is bland, terrible and even smokes a little hot, or maybe that was just me trying to find some flavor. I mixed portions of it when I could and was most happy when I smoked the last of it up. I wouldn't recommend this blend to my worst enemy.

Very odd blend, as I guess should be expected. The odd thing about it is that all the flavors seem to cancel each other out and in the end it tastes like you're smoking... nothing at all. You can feel the smoke in your mouth, but (to me at least) there is literally no flavor. It's quite remarkable, in fact. It doesn't even taste like tobacco. It tastes like nothing whatsoever.

This is more of a modest OTC formulation than an aromatic. Slightly sweet with little black Cav. It is not similar to PA or CH, as that would imply that it is good, but it is a cousin. Char light and burn rate are good. Tend to get harsh by mid bowl and has no definable character. A stuff it and forget it blend with some nicotine content. No improvement after 2 years aging. The 2014 version is quite similar to the 2016 offering, so despite being a bucket blend, there has been consistency in its makeup. A smokeable chore/yard work/dog walking blend. If budget is an issue you can get by with it. A true generic plain jane, that is what it is and no more.

Age When Smoked: 2 Years and Fresh