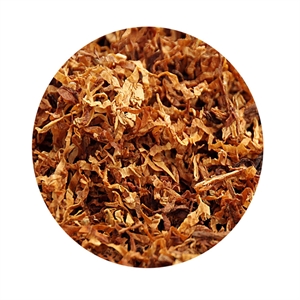 This is golden shag tobacco, and I think it is quite nice, actually. I don't know why nobody has reviewed this tobacco yet, but I personally like it. Despite its shag form, this is slow burning tobacco that wants to be smoked at a very low pace. After the first quarter of your bowl, it really develops a nice and earthy undertone that accompanies you right through until the very end of it. Some times I mix this shag with a pinch of Perique for a little bit of added flavour, but it is fine if you smoke it on its own. As for the casing, it has none, and if it does, I cannot detect it. It just tastes like plain pipe tobacco with no added flavours. In the nicotine department I'd say it is rather medium, but it looks as though it wanted to cross over to full the more you progress with your bowl. The same can be said to the flavouring. As you start lighting up your pipe, you sort of progress from medium to full. There is nothing remarkable to say about the room note, but it does not seem to bother the wife anyway. Just give it a go: you might like it in the end.

I quite enjoy this, it's nothing fabulous, but it's a decent enough smoke.

The mixture's a fairly fine golden shag. As it's in loose pouch form it's not too wet, plus I've had it cellared for about a month so any dampness has had plenty of time to dissipate.

If you like your blends to carry lots of character, this will be a disappointment; it's the ultimate in simplicity. From my point of view though, that makes it the perfect blend for regular smoking: steady flavour, mild to medium in nicotine, an even burn and no tongue bite. I think for these reasons, it would be a great blend to begin the hobby with instead of the usual beginners blends that are normally really mild, too sweet and too false.

I could see this being a regular addition to my rotation. I'll save four stars for the likes of C+D Black Frigate or Seattle Pipe Club Plum Pudding, but this is easily worth three.

Not at all unpleasant but to me more like good RYO tobacco than pipe. Nice Virginia aroma with some Kendal character from the pack - this is real tobacco and nothing else.

I find shag hard to pack at the best of times but this bites a lot if packed too loose and smoked too fast which unfortunately put me off at the start. However, it lights easily and burns perfectly to a fine ash with no dottle (or waste as I would call it...). But there is still a tendency to bite if pushed, even if well packed.

Very simple/pure Virginia character to the smoke; it is a little sweet with mainly grassy flavours. I'm not sure if I am imagining a subtle Lakeland flavour but there is definitely some complexity toward the end of the bowl with floral and talcum powder notes coming through. Worked best for me in a smaller bowl. Blends well to lighten too heavy aros too.

Somewhere between two and three stars based on my (read Fr Tom's) rating system but still quite pleasant: 3=I could make this my regular smoke if I had to 2=I can smoke it, but I think there are better options. But it is good enough that I have purchased it again (mainly for blending).

I think the reason there are not too many reviews is as this for some reason is hard to find on the website. Well done you for finding it!

Age When Smoked: Fresh from the tobacconist and stored 12 months