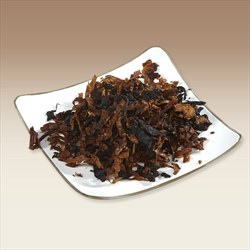 Here comes another enjoyable blend from Moonshine Pipe Co. Mason Jar Blend is a smooth and flavorful mixture of mellow Burley, zesty Virginia and velvety-smooth black Cavendish. The blend is finished with a warm, buttery note of rum with hints of caramel and vanilla and a touch of dark fruit. It's gentle enough to enjoy all day, and tasty enough to be perfect after a nice meal or in the evening.

I received a very generous sample of this from my nephew, who happens to be in the P&C tobacco of the month club. At least with the first few bowls I really enjoyed this. It is primarily a rum flavored aromatic that is pretty sweet. I really did not detect vanilla per se, but there was some other flavorings besides just rum to it.

As time drew on with the sample I found myself getting bored with it. Perhaps, I was just smoking too much of it and needed to include some more complex blends in between.

I finished the sample today with my Basil Meadows Bullet proof general cob on the way into work and thought hard about how I would rate this blend. It is undoubtedly between 2 and 3 stars for me. The fact that I like it and it is primarily a rum topped blend is something as I have not had too many rum flavored blends that I have enjoyed. The exception to this is Gawith Hoggarth's Rum twist which is a much finer smoke than this IMO.

While this blend lacks the complexity that would make it a more enjoyable smoke to my tastes, I can't ignore the fact that complexity is not really the aim with an aromatic. As an aromatic, I think that this one definitely checks all the right boxes. It has a very nice aroma that I am savoring on my mustache even now, two and a half hours after I smoked it, The flavor is pretty solid from the top of the bowl to the bottom. It does not have any weird off or chemical type taste that I can detect. While the tobacco taste itself is less than I desire, it is still there and slightly detectable.

So, While I try to be subjective with as many of my reviews as possible, I feel a strong urge to be objective on this one and will favor it up to three stars for the occasional sweet tooth departure from my more complicated smoking preferences.