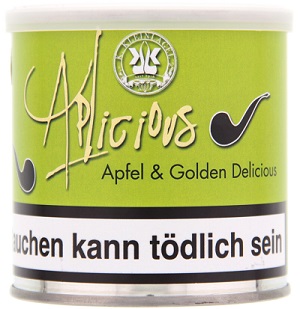 100% Virginia slowly pressed and matured as a flake tobacco and rubbed out ready to smoke. Refined with a fruity flavour of ripe apples for a mellow smoke of pleasantly fresh taste.

I know Kleinlagel from their excellent cigars which i smoke since years already. So i was really happy when through a stroke of luck a full tin of each one of their pipe tobaccos reached my smokers room.

When opening the tin you will be greeted by a clear smell of apples as well as the acidity of delicious apples (i guess that why the labels says: "Apple & Golden Delicious"). I cannot make out any of the tobacco but the vanilla clearly sits in the background. The tin aroma is very pleasantly and natural, the apple aroma reminds me of the apple smell i found in Mac Barens Acadian Perique.

Packing is a breeze and the quality of the used tobaccos is impeccable. Very high quality. Lighting takes me more matches than i like but when it burns it burns readily all the way down and rather slowly as well.

The taste is as the tin aroma smells. The apple flavour clearly takes the lead and lasts all the way down to the end of the bowl. The tobaccos also join in and are not entirely overpowered by the flavouring as the tin aroma led me to believe. The vanilla oozes in an out at will but gets stronger the harder you puff, whereas the apple gets stronger the less you puff. There is not much development going on as is common with most heavy aromatics but this blend is far from being bland or boring. Its a joy to smoke it if you are into aromatics. There is also some sweetness coming mostly from the virginias i guess although its not a sweet smoke per se. In general this is not apple candy but apple infused tobacco.

Tongue bite was no issue with me but if you are overenthusiastic in your puffing then it will nip you. Aftertaste is not as pleasant as i was hopeing for and for me it was mainly what i get from vanilla blends (again, during the smoke the vanilla is only faintly in the background) plus some faint apple. The room note is by far not as pleasant as one would expect in fact i got some negative comments on it and this also is the only real beef i have with this blend. Also i found this blend alot richer when smoked without filters of any kind.

So do i recommend this blend? Yes, i clearly do! If you do enjoy aromatics then this should float your boat and be it just for the high quality of the tobaccos used, which with aromatics is a welcome change. There is nothing bad i could say about this blend and i would not mind smoking it again.

Pro Tip: this blend also is available under the name "Bremer Stadtmusikanten Kreation No. 4" as a house-blend from Geniesser-Point in Germany. And i believe they also carry all the other Kleinlagel blends as their house-blends as well. Just in case should there be a shortage of the "original" Aplicious ...

This ones quite a controversy tobacco.

The tin note is heavily - but naturally seeming - straigt up GREEN APPLE. I'd say more like green apples with a slight sourness. If you know those candies called "Apple Rings" or "Apfel-Ringe von Trolli" (= "Apple Rings by Trolli" ; google it, so you see what it is) in german - this tobacco smells - and tastes exactly like those.

There is no tobacco taste to be found, this is a straight up heavy aromatic. The flavouring is well done, doesn't seem too artificial and can be enjoyed by pipe smokers who enjoy a Candy-like tobacco by times. Vanilla can't be clearly identified, I guess the vanilla-flavour somehow "enhances" and/or balances the fruity, acidy apple flavour.

Nothing for my personal taste - but I guess (and for fact know) there are people who like this stuff.

A little warning: This tobacco ghosts as hell! So best smoke it in a Corn Cob, Meerschaum or Clay pipe. Or just dedicate a pipe for the blend, if you like it. ;-)

2/4 Stars - This is really just something for a few people, who like heavy aromated tobaccos, and even under aromatic-fans this is just for some "chosen few" I guess. Rather a blend with a pretty small audience. Still it's decently made and well blended. This could've been much worse like it could've been much more artificial, to straight up unsmokeable. But it is smokeable, if this flatters your palate!