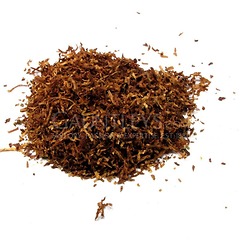 Gauntleys-African Virginia. This is meant to be used mainly for blending but makes a good smoke on its own!

It's medium weight where the cut is concerned, not too fine and not too thick. As it says shag cut I was expecting something almost cigarette tobacco like but it's a lot closer to your standard ready rubbed in construction.

The smell is very typical for a Virginia, I can't think of more to say!

Even though it's directed at blending I think a full on Va smoker would adore it; it gives a good/bright Virginia flavour with a decent burn.

As it seems lighter in nicotine than some blends I think adding some good Perique would oomph up the strength and give more depth to the flavour.

I find a similar problem with the room note as I found with the unlit aroma; it's a simple Virginia one so I don't know what to say!

This scores three stars as a smoke on it's own but as a blending Virginia I feel it's great. Four stars.