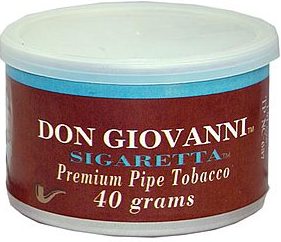 It looks like I will be the first to review this blend. I was given a sample of this back in June and finally got around to smoking through it over the last few weeks. I did not expect to like this one as I have yet to have a D & R blend that really did it for me. But this one was pretty good despite its shortcomings.

The blend is a crimp cut not unlike roll your own tobacco and perhaps this is what I was expecting due to its looks and the name which sounds like Cigarette. The taste is something altogether different. If I was blindfolded and given this blend, I would swear I was smoking Manil Semois as the taste is nearly identical to my palate. While the cut is very different from the MS, This one also comes dry and burns quite fast.

Overall, I did not like how fast it burnt or the cut as these crimp cut blends are usually a pain to pack right; however, the taste was fantastic, if not a little too monotone. Fortunately, the smoke won't last long enough for monotony to set in.

Cut reminds me of drum rolling tobacco. The driest pipe tobacco I’ve ever had. I was scared that it’ll taste like cigarettes, and have a shallow profile. Tastes like cigars though, good quality tobaccos. one match lights most of the time. Burns Very quick, like 15-20 mins in a medium bowl, few relights if any. Burns to a fine ash. Pulls like a cigar, high nicotine, get your drinks ready. No bite, however heats up like when you smoke a cigar too fast. Will definitely buy again.

This is similar to the Don Giovanni Sigaro blend, but a little lighter and sweeter. The variety of cigar leaves include the Dominican Republic, Nicaragua, Ecuador, Brazil, and Indonesia. Their characteristics include a little mustiness and leather, a bit of earth, spice, herbs, and wood, a sour note here and there, a drop or two of cocoa and coffee, and a fair amount of floral sweetness. The grassy, tart and tangy citrusy Virginia is a hair more noticeable in this version. There’s a mild sharp note here and there, but it won’t bite or get harsh. It does have some rough edges. The strength is medium, and the taste is a step or so past that level. The nic-hit is just past the center of mild to medium. Burns cool, clean and a little fast if not hydrated as the tobacco is dry, and this is shag cut, whereas the Sigaro version is ribbon cut. Has a very consistent woody, smoky, lightly creamy, fairly sweet, rich cigar flavor that translates to the mildly lingering after taste. It also has a touch of cigarette in there as well. Requires few relights, and hardly leaves a drop of moisture in the bowl. Has a strong room note. Not quite an all day smoke.

I don't like this as much as the Don Giovanni Sigaro. It's somewhat sharp: too many high notes and not enough low notes. It's a very "fluffy" cut and like all D & R's should be packed tightly, resulting in a slower burn. It is milder than the Sigaro, which has a very full taste.

That being said I LOVE this when mixed about 50/50 with the Sigaro! It results in a tobacco that is less deep but more refreshing than the Sigaro alone. Best in a meerschaum. There is a moderate amount of nicotine present, but less I think than in the Sigaro. I enjoy these Don Gionanni more than other cigar blends featuring only condiment amounts of cigar leaf, but i began many years ago as a cigar only smoker. I seldom smoke cigars anymore due to the high cost and these D & R blends satisfy that craving.