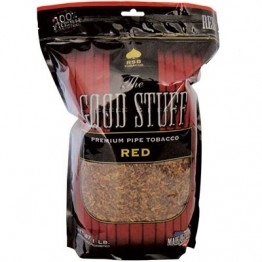 Our full flavor, Robust Blend. Mostly from the top of the stalk with more burley in the mix, our Red pipe blend gives you the heartier flavor you would expect from the Good Stuff blend.

Notes: This is RYO tobacco, though it can of course be smoked in a pipe.

Plainly and simply, this is RYO cigarette tobacco masquerading as pipe tobacco. However, one can smoke it out of a pipe, and that is exactly what I did.

Though this is supposedly a Virginia and burley blend, I detect only burley. (In fairness, unless I'm smoking a straight Virginia, I never notice its presence.) It's cut small enough that it should fill even the smallest of pipes pretty easily. When fresh, it isn't a horrible smoke.

The sample I just finished, however, had been sitting in its bag, neglected, for over a year.

I packed a full bowl, and got it going after one relight. Less than ten minutes passed before it died. It was so stale and harsh I didn't bother to relight it. The taste was roughly akin to that of an unfiltered Lucky Strike (or maybe an unfiltered Pall Mall); I don't recall such a taste when thr tobacco was fresh. The nicotine hit almost had my eyeballs swimming around in their sockets.

Perhaps, like me, this Good Stuff just didn't age well. I would suggest that if one must buy this stuff, it should be placed in a glass jar for long-term storage.

For what it is, Good Stuff isn't terrible. But unless you're on an extremely tight budget, there are better alternatives for your pipe-smoking enjoyment.

Age When Smoked: Fresh; 1-plus year

After doing some research on google on top ranked pipe tobacco. I saw this came in 2nd place. The stores around me and even in 2 different towns did not carry this. I finally found a citgo gas station in 1 of the towns that carried it. $14.99 for a large bag and $7.99 for a small bag. Then recently found a tobacco store opened and selling this brand. Then asked the manager of the little store next to our house to look in to selling this brand and a week later. they started selling it. $13.99 for a big bag. ANYWAYS, here is my review.

-it has quite a nice hit every time i fire one up. -it only has water mixed to keep it natural. -it taste so so good and i feel more active in life. -it is light and fluffy with an easy i chain smoke this everyday

I used to love good stuff red but lately its full of sticks. Makes rolling my own more difficult and jams up my machine. Why the change?