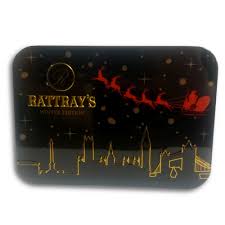 Rattray's Winter Edition 2015 is a warming blend of black cavendish, Virginias and a little burley. It is flavoured with rich fruity cherry, nutty almond and a delicate dusting of cinnamon. These flavours come together to bring you a comforting, radiant sensation, full of the glow of winter cheer and celebration. You are welcomed into the quaint seasonally designed tin by the aromas of Christmas cake, roasting nuts and spice to look upon the choice tobaccos; an array of deep black, chestnut browns and a tinseling of gold.

Perfectly moist with a texture that evinces quality, this blend fills your pipe and lights with joy. It burns cool and thoroughly giving its voluptuous smoke. The limited edition that surely Santa Claus would enjoy smoking is available now and will keep you snug throughout the colder months of the year.

Rattray-Winter Edition 2015. Anther of the new Rattray's aromatics, and to be fair I find this to be the better one out of the three as the Summer 2015 and the Caribbean Dream I found quite unpleasant.

This was from a sample baggie I bought so it's had some time out of the sealed tin for the water content to abate but sadly it's still a touch too damp. This makes me concerned as to how it would be direct from a fresh tin?!

The smell is reminiscent of cherry liqueur, the cherry swamps the aroma with a slightly sugary quality there as well. I can't discern any other added ingredients but cinnamon and almond are hard for me to recognise in the aroma usually.

The flavour of the smoke is heavier with cherries than anything else, the other additives are noticeable but not anywhere near as formidable as the cherry. The almond gives a pleasing subtle nutty quality and the cinnamon gives a touch of spice to the flavour.

I struggle to pick out much of the tobacco's in the smoke, maybe the Burley is confused with the almonds nuttiness and the sweet Black Cav' mixed up with the sugariness from the cherries?

I get quite a small quantity of nicotine from this. Even if I really give it some it only reaches medium at a push.

Tongue bite does occur with this one. It's not really malevolent in that department however if a gently technique isn't used it does make its presence known.

For me this is the best of a bad bunch. Caribbean Dream and Summer 2015 scored only one star and this one gets two stars. It's alright but I won't be purchasing any more.

On opening the tobacco, you get an overwhelming scent of Christmas cake. The tobacco itself is unique from anything else I have smoked and I believe you will either love it or hate it. I myself loved it. If you do not like marzipan, then stay well clear of this tobacco. If on the other hand you do, then this tobacco may be for you. There is an strong taste of marzipan followed by notes of fruit, which creates the flavour of Christmas cake. This is only recommended for those who like full flavoured aromatics, as the taste may be a bit much for some. Personally, I found this to be my best tobacco discovery in a long while.

Been trying to move from cigarettes for a long while...

Many Pipes, and a variety of tobaccos have failed to convince - I've tried them all. Old Gowrie and Larsen No 32 still persuade.

Expecting yet another disappointment, I thought I'd give this one a go!...

Open Up, and the aroma captivates. Never mind smoking... You could sit for hours smelling this stuff.

The appearance of the leaf encourages a smile - classy!

Taste and flavour without bite. Easy burning that extends time. Relaxing. The most enjoyable pipeful I have encountered!

(My first review - maybe not technically helpful... Just an invitation to my scene.)

Loved this one. Really nice aromatic flavor. Maybe fruit cake, without the badness. This did not bite at all and was not too weak. Maybe one of my favorite Christmas blends yet.